Helen asked to meet us in Lauren’s apartment on Wednesday at 10am to receive our teaching schedules for the semester. While waiting for Helen, this Irish guy walks in and introduces himself as Pete, another English teacher who lives on the 2nd floor.

When Helen arrived (with her cute little well-behaved daughter), she handed us several papers each and books, explaining that the school would be on their summer schedule for the next 4 weeks. This meant we wouldn’t be teaching students until the end of September, and instead we would be teaching the teachers here. I’m pretty sure all of our jaws hit the floor and Pete laughed at our shock. Teachers just sound so much more intimidating than university students, and the games and activities I had thought of probably would not entertain these older Chinese people.

Luckily, we learned that we are helping the teachers study for a test, the International English . It is a test that requires four parts, reading, listening, writing, and speaking. Because they have more foreign students now, the university wants the teachers to get better at their English.

I will teach reading and listening classes along with Lauren, while Drew and Brittany will be teaching writing classes. Each class period is broken down into two 45 minute periods, so we have 6 classes each and 12 periods total. The summer schedule is also nice because we just teach in the morning for only 3 days a week! My schedule is as follows:

We also found out that next Thursday – Sunday is a National Holiday, so I’m just teaching on Wednesday next week and then don’t teach again until the following week! Plenty of time for lesson planning and exploring the city more.

Pete left to catch up on sleep because he had just returned from traveling China for 3 weeks, and Robert came in to get his schedule and then help us buy Chinese phones.

We left the university a different way than we had before and walked down one of the market streets to one of the banks to take out money. The ATMs have an English option thank goodness. We looked inside of an electronics mall, but Robert said they didn’t have many good options so we hopped on a bus that took us further down the street to a better area. There are so many buses, and it’s hard to figure out their schedules. Robert says he used to just hop on a bus and if it started turning a way he didn’t like, he would just get off.

Robert told us about the different cell phone services here and what kind of 3G/4G and data we could get, but I knew coming over here I probably just wanted to buy a cheaper phone since I have my own iPhone that I can use for wifi. The other also wanted to buy cheaper phones and didn’t see any inside the cell phone store (which looked just like a cell phone store in the US.) Robert told the phone saleslady what we wanted and then she laughed and pulled out boxes from under a counter.

“I told her you wanted old people phones,” Robert said. “They don’t even put them out because people don’t buy them anymore.”

We were in the store for a long time – they had to look at our passports, then we had to pick out what phone number we wanted, then have them switch the phone to English for us. The other salespeople in the store were taking pictures of us, and as we left, a lady from another phone store asked to take a picture with me. 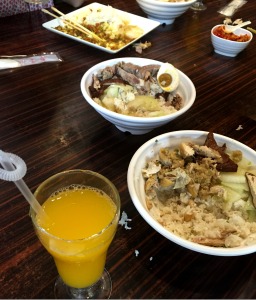 Robert treated us to a place by the supermarket for lunch because it was 2pm and we were really hungry. He told us that the food places with doors are considered a little nicer and will shut down in the afternoon, while places with a garage door will stay open all day. This place had glass doors and was nicer, but was still considered China fast food. We asked Robert to point out things he liked and we requested things they might have and then wrote them down to remember them. We ordered several dishes and shared beef and potatoes, chicken and rice with tofu, and duck and rice (still not used to the duck taste).

The air conditioning repair man was waiting for us when we came back! So I now have working A/C in my room, a Chinese phone, and lots of yuan in my pocket. It’s all you can ask for really.

In the evening we ventured back out to the large supermarket. It was so much easier going in a second time and knowing where things were and what to expect. We decided to all cook dinner together – Lauren got some chicken breast, peppers, onions, and garlic, Brittany and Drew got rice, I found these little wonton things, and we all grabbed soy sauce, salt, and pepper.

We saw more people burning fake money on the way back and forth. The streets were full of people and fire and firecracker sounds. 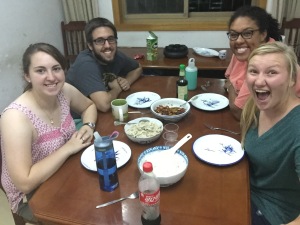