And so the winter break adventure begins.

I’ve been so excited for this day to come for so long – I’m ready to soak up Thai culture and all the warm weather I can while we’re here. We decided to spend most of our time here at Thailand’s largest island Phuket because of the beautiful beaches and attractions nearby (like snorkeling, elephant safaris, and the Tiger Kingdom)

Our flight was 4 hours, but it felt like longer than that to me. For some reason the airline didn’t allow the use of cell phones at all, so the book I planned to read on my phone had to wait. Also, there was an unfortunate situation with a little girl in front of us – she was woken up from her nap and wouldn’t stop crying the last hour of the flight. 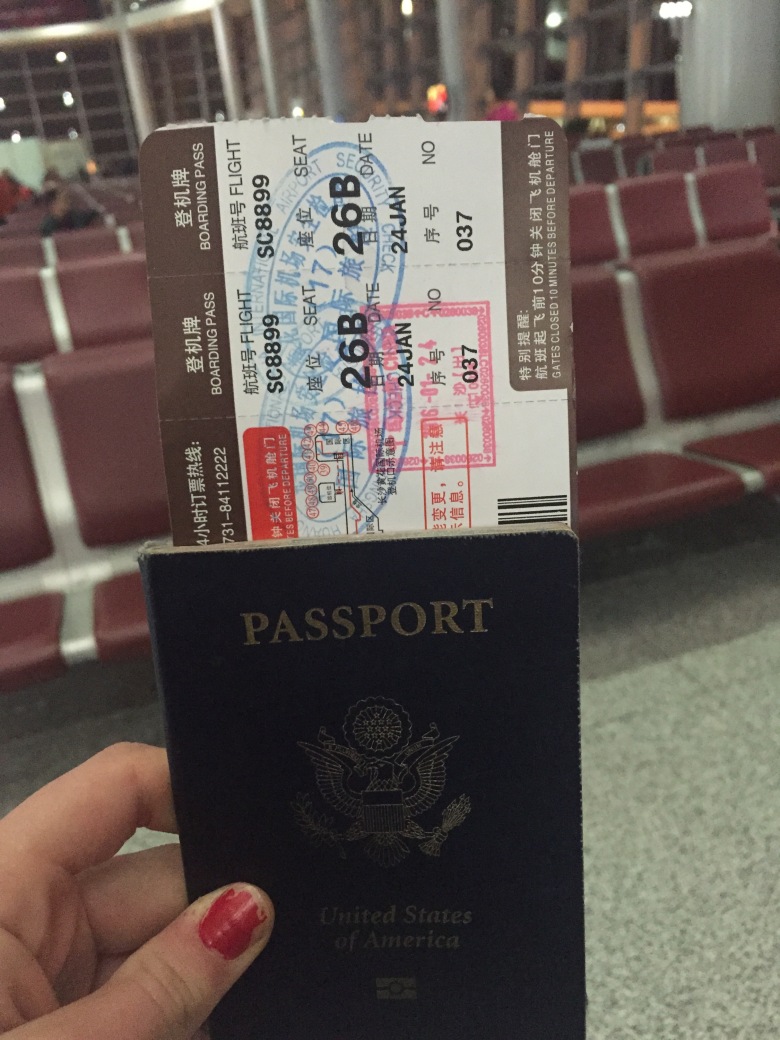 But we made it.

The cool thing about Thailand is you don’t need a visa to visit if you are an American citizen – so we just had to fill out arrival cards, wait in the long line (there were so many people there at 3am!), and then pick up our checked luggage.

I found this little place called Panpen Bungalows near the airport, and they had free airport transfers any time of the day, so they were waiting outside at nearly 4am for us with my name on their sign.

A few things about Thailand:

The guys at Panpen were really cool – they checked us into our two bungalows (1,000 baht per bungalow, $27.76) and then drove us to the convenience store down the street for water and snacks.

Thailand already has so many familiar American things China doesn’t have. We saw loaves of sandwich bread, barbecue chips, and chocolate milk. There are also 7/11s everywhere (I think bigger cities in China have them too, but not in Hengyang).

After showering (they don’t have hot water at the bungalows because it’s so warm here) we were ready to sleep around 5:30am.

The owner of the bungalows offered to drive us to the beach nearby the next morning. Around 10:45 we drove 5 minutes to a gorgeous strip of sand called Naiyang Beach. The owner of the bungalows, Mr. Ling, also owns a restaurant by the beach and we had our first Thai meal – spring rolls, fried shrimp, chicken and pineapple, and beef. I’m not sure if it was the most authentic Thai food, but it was dang good.

We had an hour and a half to go swimming and lay on the beach. The weather was perfect! 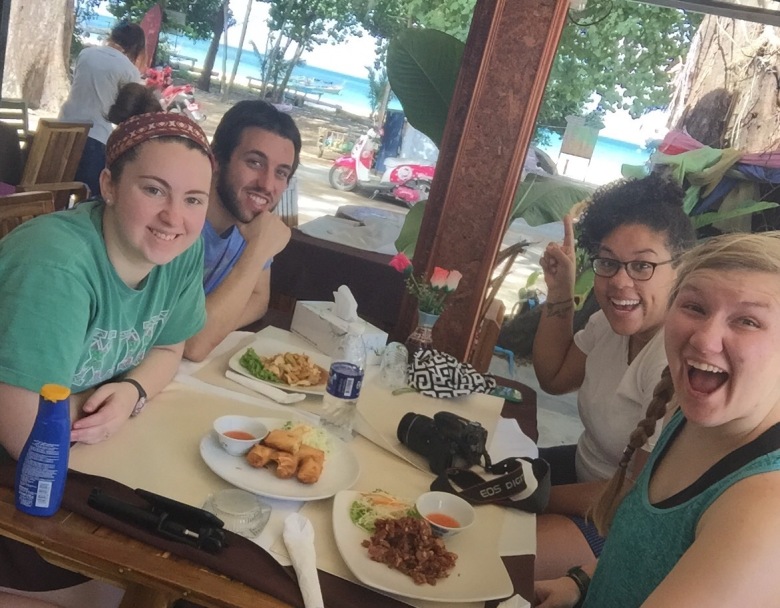 At 1pm we went back to our bungalows and packed for our next leg of the trip. We are staying in the city of Patong for a few days, one of the most popular beach areas in Phuket and a pretty touristy area. Mr. Ling arranged a van (the driver is a friend of his) to drive us there for 1000 baht, a pretty sweet deal since the van would normally cost 1500 baht.

We’re staying at the Dfeel Hostel, which is about a 20 minute walk from the Patong Beach.  Lauren and I went exploring after we checked in and found all kinds of interesting restaurants and touristy shops on the way.

(Side note: Lauren and I are staying in a 4 bed mixed dorm room, and we figured out there are two boys also in the room. We haven’t met them yet though and we’re taking guesses on who they will be and what country they’re from. To be continued.)

We met up with Brittany and Drew for dinner at a Thai restaurant and then went back to the beach to watch the sunset. A group of American girls came up and asked if we were Americans based on our chacos and my kavu bag haha. We haven’t met other Americans in so long! It was so exciting to talk to them about the mission work they’re doing here and in other countries with the World Race.

Afterwards we walked around the city, exchanging more RMB into Thai baht and looking at local food vendors. I love Thailand already – the food and the people and country. It’s all so beautiful!

Today has felt so long, though. We’ve technically only been in Thailand for one day since we arrived at 3am, and it’s been jam-packed. But I’m excited for the next Thailand filled week! ราตรีสวัสดิ (Thai for goodnight. Not even going to pretend like I knew that, learning Chinese is hard enough)

I’ll be updating through my phone for the next two weeks, so please excuse any mistakes I make and lack of many pictures!