Feelings teetering between sadness (from leaving Thailand) to excitement (going to a new city in a China), we were at the airport bright and early for our 10am flight to Chengdu.

After another phenomenal flight with Thai Airlines (seriously two of the best flights I’ve ever had, and the airline food was pretty good too) we braced ourselves for the cold when we landed, but it actually wasn’t bad.

We found a shuttle bus to take us to the city center, and then caught a taxi to our first hostel, Nova Traveler’s Lodge. First off, it was pretty exciting to be using RMB instead of baht, because that’s my brain’s default currency now. Also, Chengdu is so much bigger than Hengyang but not quite as big as Guangzhou, so I was really looking forward to exploring.

The hostel recommended a snack/food area with some local Sichuan specialties we should try so we headed there for dinner. The Sichuan province is known for its spicy food, even spicier than Hunan where we live. We tried some Twice Cooked Pork Belly, potatoes, and noodles. 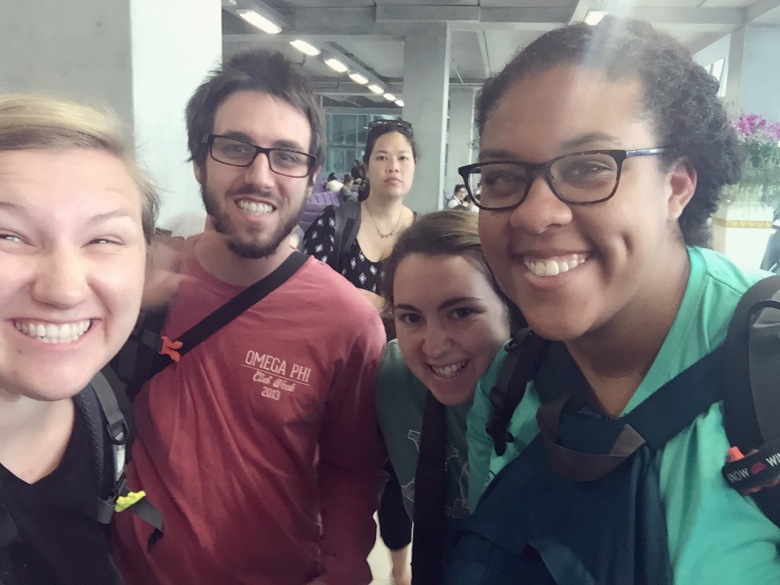 The next day (after blissfully sleeping in) we grabbed lunch and went to tackle our current conundrum. Chengdu is famous for the panda breeding centers in the area, and we wanted to visit one – our main reason for coming to Chengdu. There is a program at the Dujiangyuan Panda Base that lets you volunteer for the day (for 1500 yuan) and then you can choose to HOLD a panda for 1800 yuan (like 300 USD) It’s crazy expensive but we decided to go for it. Then we found out you to hold a panda you have to have a medical examination done to prove you don’t have an infectious disease. In Thailand my Panda contact told me our medical exams from last May were too old and we needed updated forms, so we set off in Chengdu to find a hospital to do an exam.

Unfortunately the first hospital’s sent us up to the 5th  floor where no one worked, and the second hospital we went to was shut down. The third hospital told us they didn’t know which disease test to run and the panda bases they called said the hold a panda program wasn’t even possible anymore. (The panda programs are, of course, very concerned about the well being and safety of their pandas so most places have stopped letting people hold a panda)

Very confused, we moved on to our next exciting Sichuan experience: hot pot. So I’ve had hot pot a thousand times with my students now (ok like 5) but everyone has said Sichuan hot pot is the best hot pot in the world and Hengyang hot pot is rubbish.

Our friend Ruby, who is president of the Nam Hua English Association, met us with her friend Rico at a restaurant to properly introduce us. And it was HOT. They call this kind of spicy “numbing” because you can’t feel your mouth. But it was very delicious, and included many hot pot items I love, like potatoes and mushrooms and meat. It also included chicken feet (which I didn’t try) and duck blood (which I did try and don’t necessarily recommend) 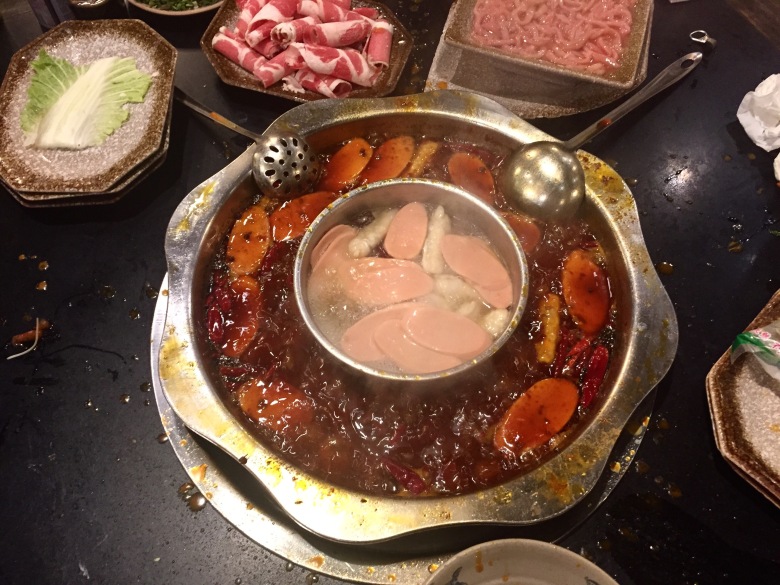 The next day was our big adventure to Mount Emei. I was super pumped to climb another Chinese mountain, and this mountain was supposed to be breathtakingly beautiful AND it has wild monkeys on it.

To get there, we took a taxi at 6:30 to make our 7:30am high speed train to the Mount Emei area. We arrived at 9am and then had to buy a bus ticket up part of the mountain, because the mountain is really big and would take much longer to walk it all than the time we had to climb it.

One thing I didn’t really think about – it’s winter, and we’re up in the mountains, so of course there’s going to be snow and ice everywhere. It was such a contrast to the sunny beaches we left behind in Thailand, but still a beautiful winter wonderland.

Once we got off the bus it was around 11am, and we saw a wild monkey sitting on a roof! I was really excited about that (but that was the only monkey we saw the entire time, spoiler alert). We bought shoe spikes from some people before we started climbing. *Side note, I paid the lady with a 20 yuan and she chattered after me and it turns out I had a fake 20 bill that a taxi driver gave me. So be more careful Rachel!!*

We started up the mountain and found out if we walked the rest of the way it would be about 3 hours. We were a little worried about time, because we needed to make it to the bottom around 3pm to catch the last bus and make it to our train on time. We went up the cable car route and then hiked the extra 20 minutes to the top from there. Sadly our view was blocked by all the snow and fog, but the top was still really cool. There were many temples and places to worship, and a giant gold Buddha. I’d love to come back when the weather is warmer. 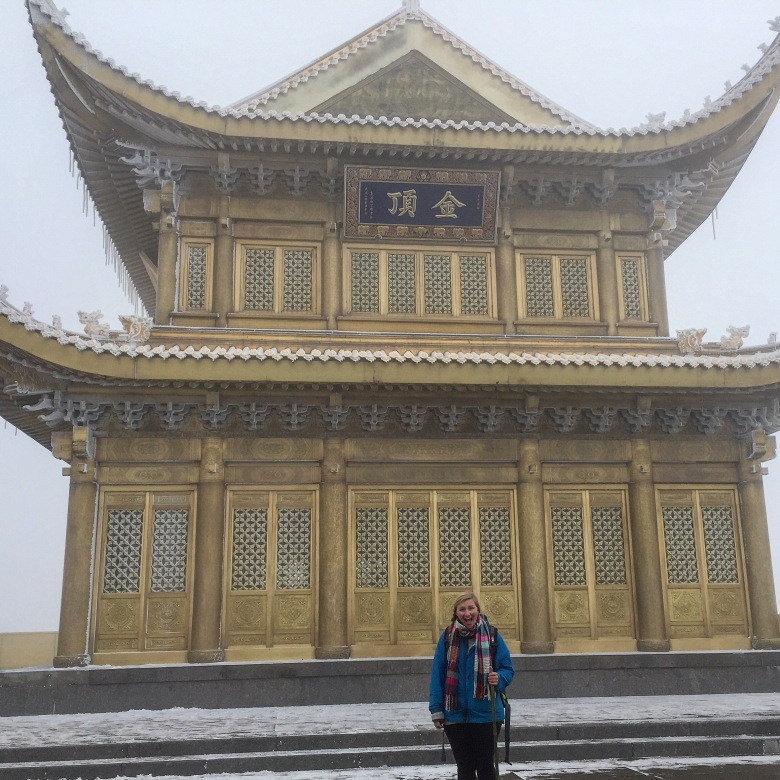