The plans you make for traveling tend to change and play out in a way you didn’t expect them to. Which happened to us, after we fell into our beds exhausted from our day of traveling and hiking Emeishan. Our original plan was to leave for Song Pan the next morning very early and spend the next three days in the northern part of Sichuan and maybe do a horse trek.

After spending a day in the cold on Emeishan, we decided we would rather stay in Chengdu and take it easy, rather than try to figure out if we could get a bus ticket the next morning and possibly freeze to death in the middle of nowhere. (Song Pan actually sounded really great, and some friends said it was one of their favorite places in all of China, but I think they went in warmer weather.)

I really enjoyed having a free day to take a bus to Chunxi Square, a popular business/shopping area. I found a 12 story –twelve stories – mall that had everything from H&M and Starbucks to this great Japanese store call UniQlo to Subway. So it wasn’t the most culturally adventuring kind of day, and I tried absolutely no new Chinese Sichuan food, but after living in Hengyang with nothing but Chinese food, it was a nice break to have more options. This mall even had a bowling alley (what is BOWLING!? I haven’t done that in so long) that we tried out later that night!

I did the same thing the next day, checking out more shopping areas and walking around Chengdu some more. That night we all met up to go see Kung Fu Panda 3. WOW. I’m not just saying that because it’s the second movie I’ve seen in a theater in 5 months, but it was super cool to see it in Chengdu, home of the pandas. I hadn’t seen the second Kung Fu Panda movie and had no expectations for the movie, but it was actually really funny. (Maybe it’s because I’ve been in China too long.) Staying two extra nights at our hostel was really nice too – we’d been moving around after every three days or so, so planting some roots down made our time in Chengdu even better.

We had a tour at the Panda Breeding center in Chengdu and loved it. With our hostel it was 99 RMB, including transportation there and back. We didn’t get to hold pandas or anything, but we got to see some cute panda babies playing and climbing trees and that was worth it. 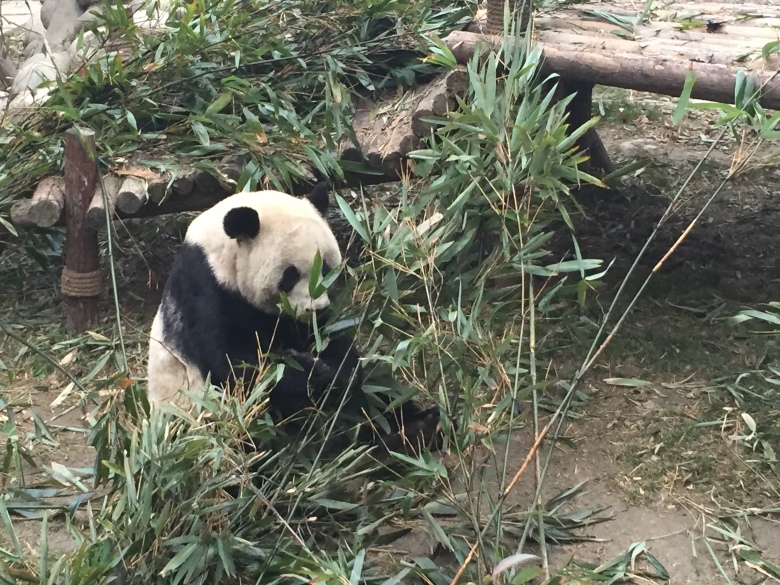 We moved to our next hostel in the afternoon called Lazy Bones. And I fell in love immediately. (And not just because of the cat sitting in a chair in the lobby.) We upgraded to a private 4 bedroom with a bathroom for 45 RMB each per night, and the desk workers Nancy and Max and Jeniffer were all super cute and helpful!!

We took a taxi to this awesome place called Jinli Street, this great food and shopping area. They had beautiful lanterns and decorations everywhere, and some good street food.

Next (it was a busy day!) we went to the Sichuan Opera, which is famous for it’s changing faces performance. The hostel arranged transportation there and back, and it was more than worth the money spent. If you go to Chengdu, you have to see a Opera! It was SO funny and entertaining. They had screens on the side that translated what the characters were saying, but you didn’t really need it to understand what was happening. It was a strange combination of a love story, comedy sketch, fire breathing, Chinese traditional singing and dancing, and of course, the face changing. People would wave flags around and their masks would change (HOW DO THEY DO IT???) 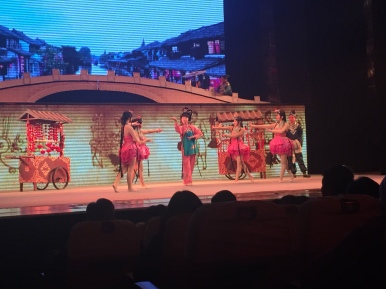 Chinese New Year’s Eve! All my students were going crazy on QQ and Wechat, sending me well wishes and lucky money online and posting about their families and food they were making. It was exciting to see how they celebrated their big holiday!

We signed up for a Sichuan cooking class the hostel had, and I (not really being a cook) was a little hesitant, but really enjoyed it. Ms. Yang didn’t speak English, but Nancy helped us translate and comforted me when giant fireballs were flying my face. We learned how to make a tofu dish and a pork belly dish, two Sichuan specialties.

That afternoon I took a walk around our new area and found a famous “Wide and Narrow” street with lots of shops and old Chinese style architecture. Later that night we made dumplings in the hostel with other international travelers and watched some of the New Year’s Eve Gala on CCTV. It’s a big event, with many singing and dancing performances broadcast from all over China (And my favorite singer Zhang Jie performed too!)

The next day (Chinese New Year) we headed back to Hengyang – a taxi, a two hour plane ride (where I couldn’t be on my phone again), a bus, a high speed train, and another taxi later, we were back in our apartments. It’s crazy how long it feels since I’ve been here! Our two weeks of traveling were awesome, and it’ll be nice to have a few days of rest before part 2 of our journey! Up next is Beijing, Shanghai, Hangzhou, Suzhou, and Wuhan!