After 3 days of lounging around Hengyang (everything except the grocery store was closed for the Spring Festival so there was nothing to do haha), we began the next part of our traveling! We grabbed a taxi around 8:45am to give us time for our 11:30am flight from the Hengyang airport.

We landed at 1:30pm (once again, we weren’t supposed to use our phones on the flight, even for reading a book. Come on China.) Because we flew from Hengyang’s small airport, we didn’t fly to the big Beijing Airport, but a smaller one used more for the military. We bought a bus ticket to the Beijing South Railway Station because we knew there would be a metro stop with it. After a late lunch at BK, Lauren and I left Brittany and Drew to find our hostel while they checked into their hotel and met up with his family.

Our hostel is called Sanlitun – there’s only wifi on the first floor and our room is swelteringly hot, but the beds are the most comfortable hostel beds we’ve ever had so it’s not horrible haha.

We rode the metro to meet up with the others for dinner (only 6 stops away on metro line 2) and it was so exciting to meet the Taylor family and introduce them to their first Chinese meal! It was funny thinking back to our own first Chinese meal, feeling jet lagged and confused at all the strange food.

Also, it was the 5th day of the spring festival, which is a big day for shooting off fireworks. Beijing streets were going nuts. We hear fireworks a lot outside our apartments in Hengyang (for no reason), but this was so much louder and more frequent. It felt like an air bombing was going to happen, with flickering lights in the sky and loud explosions everywhere.

Up first on the Beijing checklist: The Forbidden City. This is where the emperors   lived for hundreds of years and is a definite must see. It’s huge and takes awhile to walk through and see all of the various palaces and empress/concubine living quarters. Our guide, Angel, told us the story about the most famous concubine (whose name sounded like Sushi)

Only 80,000 people are allowed into the Forbidden City each day, so most people like to get there early. 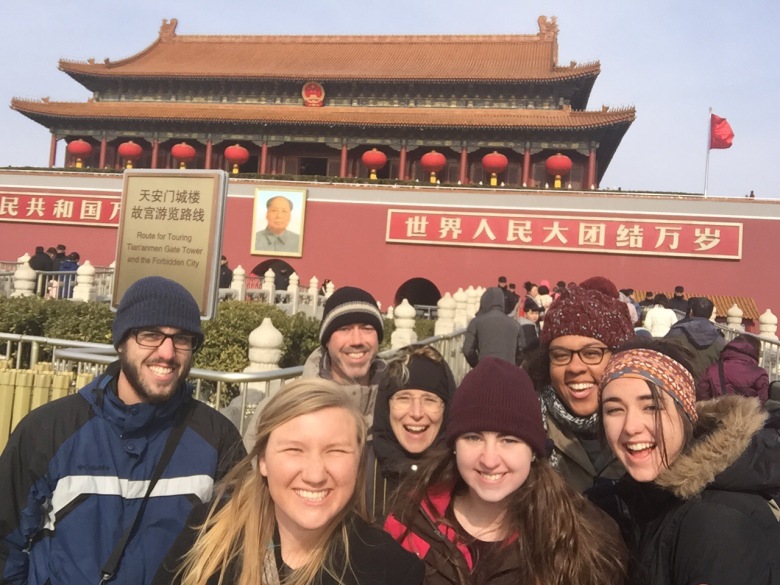 After the Forbidden City, Angel led us to a tea house behind the garden. (Important – be careful with people claiming to be guides who approach you and offer to take you on special tours or to tea houses. It worked out ok with us, but I was a little worried it would be sketchy since she wasn’t with an official tour company)

For 30 yuan each we learned about various kinds of Chinese teas and how Chinese people traditionally drink them. It’s called tea “tasting” because you drink from this cute little cup instead of a big mug. We tried fruit tea, jasmine tea, purer tea, and black tea. 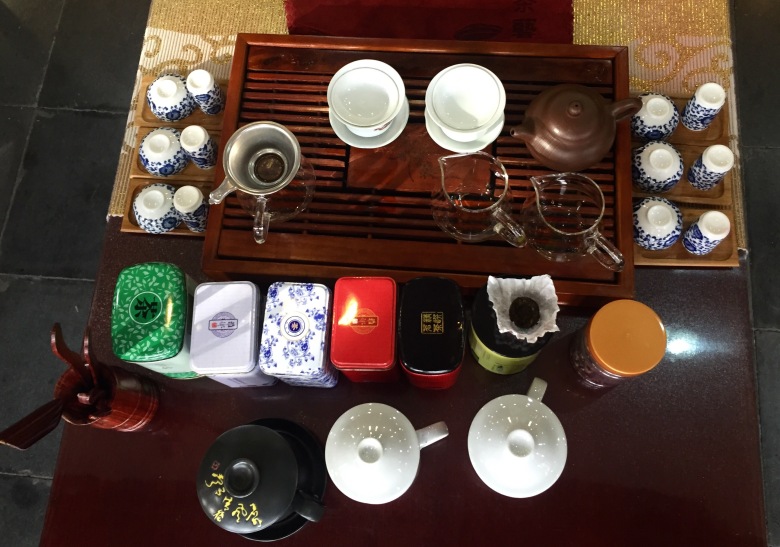 After grabbing late lunch/early dinner at a nearby restaurant, we went to Wufingju walking street. It is very similar to streets in Xian or Chengdu, with all kinds of meats and noodles being sold. It’s also a big shopping area with lots of stores and malls. 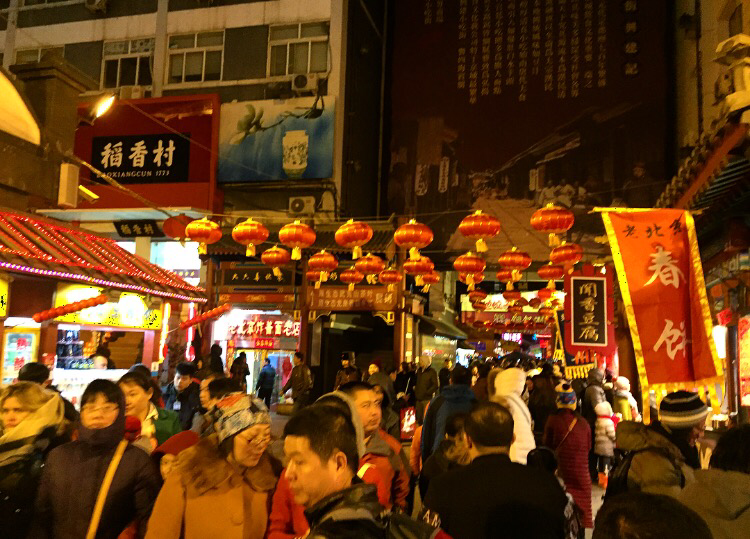 Happy Valentine’s Day! I started the day early with Lauren in Tienanmen Square, before we split up. We took Metro line 2 to line 1 for 3 yuan and got off at Tienanmen East. She went to the National Museum and I wandered around the square a little more. It’s one of the biggest public squares in the world and holds so much history. You could spend a whole day here if you go to the National Museum and then see Chairman Mao’s body, but I didn’t have a whole day. I set an agenda for myself because today was my only free day to wander Beijing and I had a lot to see!

Next: the Bird’s Nest and the Water Cube. I’m a huge Olympic fan (but I guess who isn’t) and after seeing the Greece Olympic stadium and touring the Colorado Springs Olympic training center this past summer, I couldn’t pass up the Beijing site.

I transferred from metro line 1 back to line 2 and then to line 8 for 5 yuan and hopped off at the Olympic Green stop. You head up some stairs past a shopping area and BOOM. Bird’s nest. You have to go through security, but then you’re free to roam around. They’ve converted the big stadium into a winter playground right now, and I didn’t want to pay 50 yuan for that, but I still immensely enjoyed walking around. I know the Chinese people are super excited to be hosting the Olympics again in 2022 and I got asked to take pictures with several Chinese families haha. 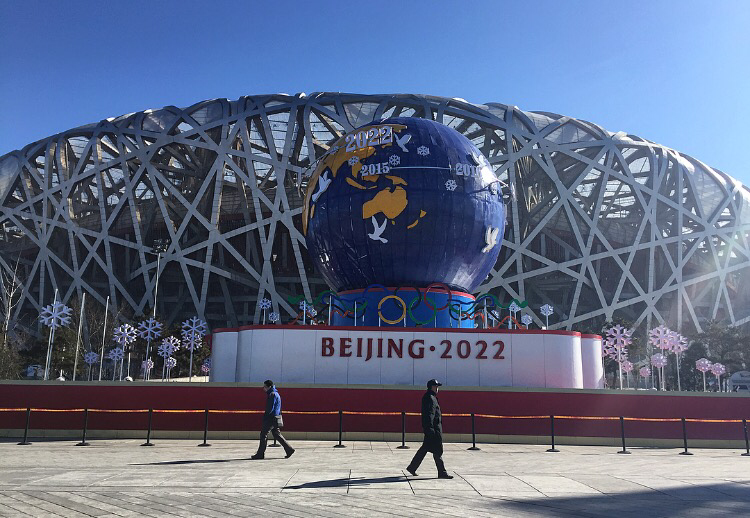 Next: The Summer Palace. I took metro line 8 to line 10 then to line 4 for 5 yuan. For 20 yuan you can walk around the gorgeous area and see old buildings and beautiful scenery (as our students always say). There are other temples and sites you can pay extra to go into, but I decided just to stroll around the main area. I wish I had more time to spend walking around! 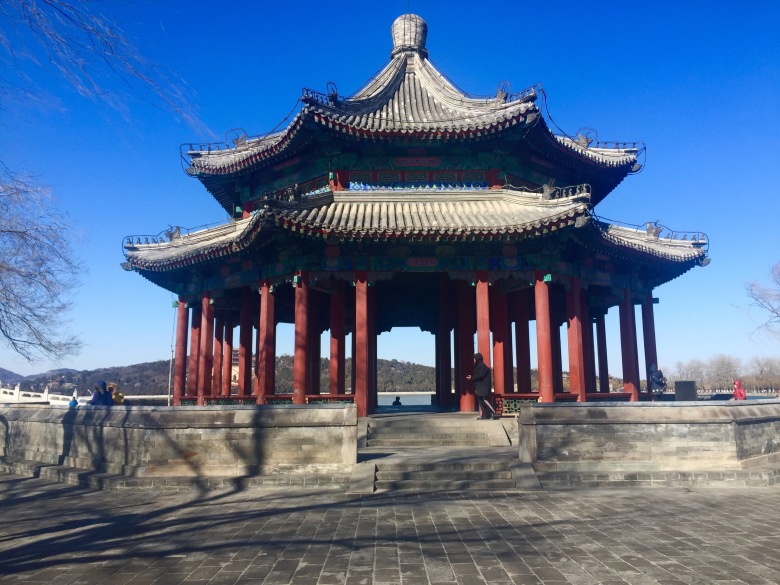 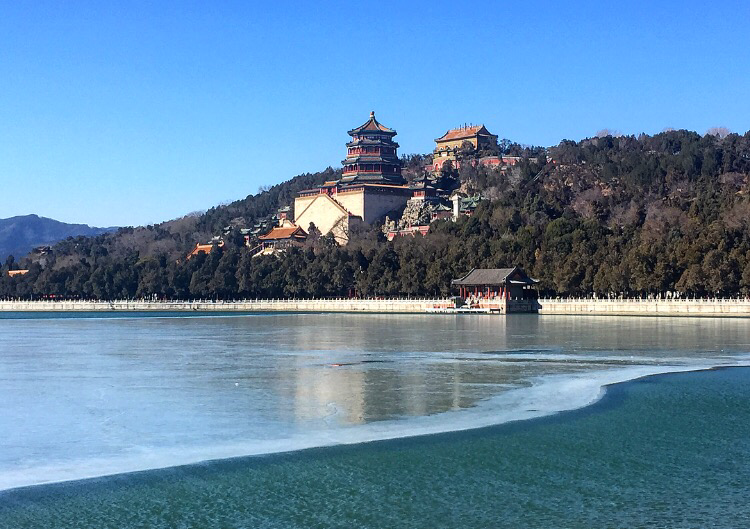 I took metro line 4 to line 2 then line 5 to check out the Longtan park fair going on, but that turned into kind of a bust so I met up with the Taylor clan for some Sbux and dinner. During the spring festival week, Beijing is famous for having lots of Temple Fairs and shows, but I think most were over by this time because the Taylor’s mentioned the one they went to wasn’t so great either.

Dinner was great! We went to a highly recommended restaurant and after a crowded waiting time, we got seated and ate some great noodles, meat dishes, fried shrimp, and most importantly, Peking duck. Everyone knows the Peking duck is the Beijing specialty you have to try.

Peking duck is made by slicing thin strips of crispy skin, not huge chunks of meat. You dip it in sugar or sweet sauce. You also make “duck pancakes” with it. Our waitress helped show us how by putting a few duck slices into a thin wrap and then adding sauce and pickled radish or cucumber slices. Duck isn’t my favorite dish, but I’m glad I tried it!

The day I’ve been anticipating since I knew I was coming to China almost a year ago.

There are several Great Wall sites you can visit – some are closer to Beijing, some are more popular sites, some are more refurbished than others. It depends on what kind of Great Wall experience you want. The Taylor’s booked a driver to take us to Jinshanling, a part of the Great Wall that is farther away but is a favorite for photographers. It also had a little more hiking than other sites.

We left around 8:15am and started around 10:00. It took 15 minutes to walk up to the Great Wall, and then we spent the next 3 hours exploring and basking in the glory of the ancient place. (And pretending to be Mulan fighting the Hun army)

I cannot overstate how amazing it was. Like I’ve heard and read about this place since forever ago, and it’s as awesome as I imagined it would be. All you could see was the wall and the beautiful mountains of China for miles around. The Great Wall is a definite must see. 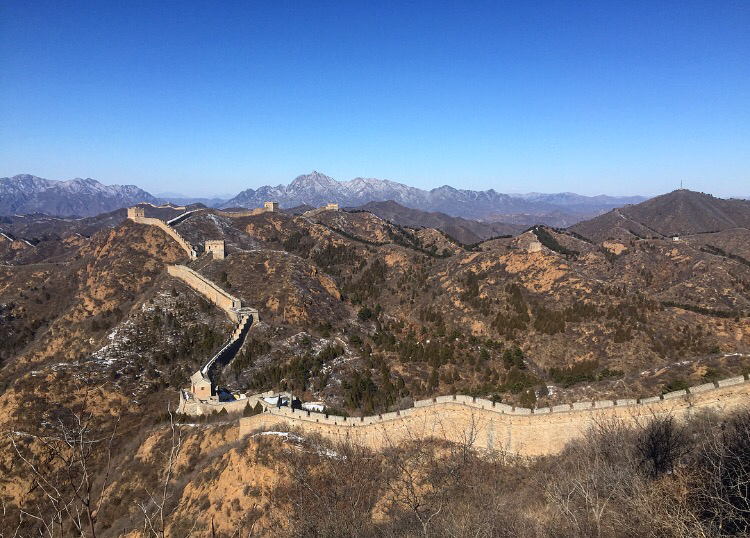 We grabbed dinner near the Taylors hotel again and then spent a relaxing evening singing and reading together. It was so nice to share the Beijing experience  together and they had lots of encouragement for us (and American snacks!)

So that was Beijing in 4 days, another Chinese city I’ve fallen hopelessly in love with. I already want to come back again.

We’re headed to Shanghai next get ready!