I have to fess up, when I was getting ready to come to China I was browsing around on Pinterest and saw an article about the best cities in China to visit. And Hangzhou and Suzhou were on them. (But who doesn’t look these things up on the world wide web or Pinterest huh?)

So with  a few pictures and a little research, we went to Hangzhou first on a fast train and made it to the hostel around 4pm. This hostel was in a great location, right next to the bustling Hefang Street, a well known area for street food and shopping in traditional Chinese looking buildings. It was also just a 15 minute walk away from West Lake, the main attraction in Hangzhou.

It’s said that Marco Polo visited Hangzhou in the 13th century and called it the “most beautiful and elegant city in the world”. And it’s true, it is beautiful, and the lake area is teeming with boats you can ride and temples you can visit and shops and peaceful pathways. On Friday Lauren and I walked around part of the lake (it’s very big and would take a long time to walk all the way around) but unfortunately the weather was a big hazy (you know how China is) so we couldn’t see much across the lake clearly. We still ate some great Chinese food for dinner and had fun exploring the streets of Hangzhou a little more.

We planned on waiting to buy a ticket to Suzhou until we arrived in Hangzhou, because we weren’t sure if we wanted to go by train or bus. We went by train because it’s much more convenient for us (in my opinion) because we have the train system down.

I was super excited for Suzhou, because it’s called the “Venice of the East” and was supposed to have a great little water street. For Suzhou we didn’t book a hostel, but we found a good deal at a little hotel. I feel like we got the real traveling experience there because the lady couldn’t find my reservation and spoke absolutely no English.

I rode the metro around 11 the next morning to Shantang Street, the old water street. And it looked just like a postcard. Lauren joined me later, and we had a great time walking around the ancient places and modern malls. It’s kind of funny though, once you’ve been to a few cities in China, you start noticing the similarities. Lots of cities have street food and open markets and souvenir shops that sell chopsticks and tea and china and scarves, so you just have to find the best prices that you can and pick and choose what city you will buy things in. 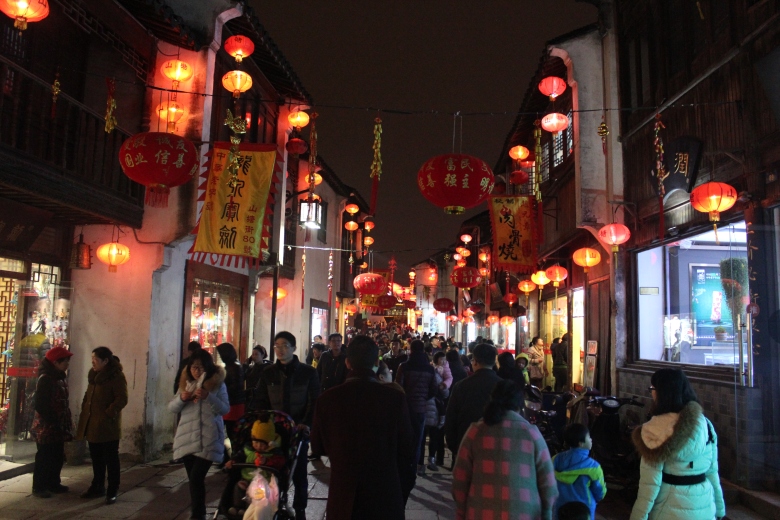 We had a 5 hour train to Wuhan the next morning, the capital of the Hubei province and a large city with lots of universities. Several of our friends actually teach in Wuhan, and we were delighted to find that our friend Alden was back from his own traveling and could share some of his city with us. We tried traditional Wuhan noodles called “reganmian” which means hot dry noodles, visited the East Lake, and walked through the Hubei Art Museum. It was actually really cool to learn more about Chinese art movements and their history, and see paintings made during war times.

We rode the metro down to the last stop on line 3, to check out the International Street. It was this giant shopping area with different country themes. They had a Spanish, Italian, and German area with matching architecture and decorations. We had delicious eggplant, garlic broccoli, black pepper noodles, spicy beef and rice for dinner before parting ways and heading back to our hostel.

As sad as I am to be ending our travel, I’m also glad to be going back to Hengyang and resting a bit. Our train left around 3:45pm, so we had plenty of time to pack up, walk to the metro, and hop off at the Wuhan Railway stop (and grab lunch at a fancy Pizza Hut inside.)

I feel so incredible lucky and grateful to have had the past 5 weeks to travel. I realize we have been very blessed with the time and means to hop on planes and trains and boats all over the eastern side of the world and see some significant and amazing and ancient things. Feeling in a constant nomadic state was both thrilling and exhausting, as we moved every 2 days to fit as much of China as we can into such a short span of time. And the more I’ve seen, the more I realize how little I still know and understand about China, but I also see how much I’ve learned in the past 6 months (6 months!) living on the other side of the world. This month alone I’ve bought more metro tickets, read more kindle books, eaten more street food (and let’s be honest, fast food),  and repacked my suitcase  (and reworn the same 4 shirts) more times than I can count.

Before we left for Beijing, I was Facetiming my mom on her birthday and we had a conversation that has stuck with me. She said her 20s feel like a lifetime ago – you need to enjoy the season of life you’re in and appreciate the time you have before it passes. And of course I think about that as I’m living here, but I was also thinking that being in high school, studying abroad in Greece, and even graduating from Harding feel like forever ago, so one day living in China will feel like that too. In the future it’s going to be this awesome life changing memory (unless I find a Chinese boy to marry and live here the rest of my life), so I’m thankful for every day I get to wake up in this confusing and strange and wonderful country.

(Sorry for the lack of pictures, I have a lot to sort through)