We’re through with week 4 of the new semester and that’s just crazy. I’ve enjoyed the past several weeks immeasurably, mostly because I’ve been so busy. I think I’m happiest when I’m busy, things to do everyday, people to see and places to go.

During the past few weeks I’ve judged another English contest, visited Robert’s English school, played ping pong with the Chinese guy who took me on a date last semester, been recruited to teach at another English school (but that’s nothing new), eaten durian (the Asian fruit with the funny smell), and made an appearance on Chinese television (hahaha)

My classes are going great! I’m trying out some new things this semester and introducing weekly English phrases/idioms/slang that the students enjoy learning about, and also starting weekly current event discussions that a different group will be in charge of each week.

It has been raining NON STOP the past few days/weeks. I’m actually okay with it, because it’s kind of hard to beat that cozy feeling inside a coffee shop on a rainy day. It’s also been perfect for reading. I canceled my netflix account (1. Because netflix has changed their VPN rules. Normally I connect to the US, thus changing my netflix country shows and giving me access to all the shows everyone at home watches. Without my U.S VPN connection I have access to less shows, and it’s not worth it, and also 2. I’ve made it a goal to watch less and read more. I had the Amazon kindle unlimited free trial for a month during our travels last month and I’ve become so addicted I think I’m going to keep it. It’s a little more per month, but it’s so worth it to have access to so many English books that I can’t get in China.)

So I visited Robert’s English school with Ruby, the president of the school’s English association and the student we saw over the Spring Festival break in Chengdu. She’s so awesome. Robert’s school is in the new part of town and it took around 35 minutes for us to walk there. I met a lot of older English learners that night, including some doctors and nurses at the Nan Hua hospital and some teachers at our university.

And then Davy showed up with some of his medical student friends (Davy=Chinese date guy) He really is such a nice guy, and he just wanted to talk and ask me about my spring travels. And he asked, “So, Rachel, is there someone significant in your life?” And I was like “uh lol, no, how about you Davy?” And he said, “Well I have a funny story to tell you. Actually I rented a fake girlfriend to bring home for the spring festival.”

Now. It’s okay to laugh a little at this. I did. But this is actually not unheard of in China. I talked about this with my students a few weeks ago. Although none of them had met someone who did this, they have heard about it happening. In China when children get older, they start getting more pressure from their parents to get married and start a family. Especially for older guys and gals like Davy, who is 29. So, some people will rent out a fake girl/guy friend to bring home and ease the parent’s pressure a little bit. Davy decided to try this out and bring one of his friends who works with him at the hospital. He said he later told his parents she was not really his girlfriend and they didn’t believe him hahaha. So all in all it was nice to catch up with him over a game of ping pong.

Ruby has a friend named Lee who is starting an English school, and he asked if he could meet with me sometime and talk. Going into this meeting I knew he mostly likely wanted to hire a Foreign English teacher and I was going to have to politely decline. This is such a common thing for foreign teachers in China – we get offered jobs a lot. Some Chinese friends will message me and ask if I want to work at a kindergarten or teach at an English school in town, and as much as I’d love to help and make a little extra cash, it’s against my contract with our university here.

Most schools in China are like this. If they make the investment in a foreign teacher and take care of your salary, apartment, flight reimbursements, etc, they don’t want your time and energy focused on other things besides your university classes. People have been caught breaking this rule at other schools, and I heard one guy had to pay his school a 6,000RMB fine and the police station 6,000 RMB (he got caught and went to jail and had to get out).

So I met Lee at a coffee shop near the canteen and he was really nice. He told me he would love to hire me and that we could avoid making an official contract and I was like haha thanks but no that’s sketchy. I would love to just hang out and meet students though, so I think it will be nice to build more relationships that way.

Last Sunday my student from last semester, Skyler, invited me for a day out with her family. They were going to a place in the countryside near Hengshan mountain, a beautiful flower field called Hongxing. It rained on and off all morning, but the flowers were gorgeous. I’ve never been in a field of flowers like that before, and I’ve always wanted to.

While we were there walking around, we saw some people with big cameras hoisted on their shoulders and found out it was the Hunan news. They saw me and started asking Skyler’s mom some questions, asking if it was okay to interview me. The reporter asking questions actually knew some English and said smiling, “Why are you here?” (It was strange to see a foreigner in this countryside area. It was a bit like being in Chenzhou with the kids who had never seen a foreigner.) She also asked me what I thought about the Chinese countryside.

It was a really neat experience, and very cool when Skyler messaged me the next day with photos from the TV broadcast of the interview! 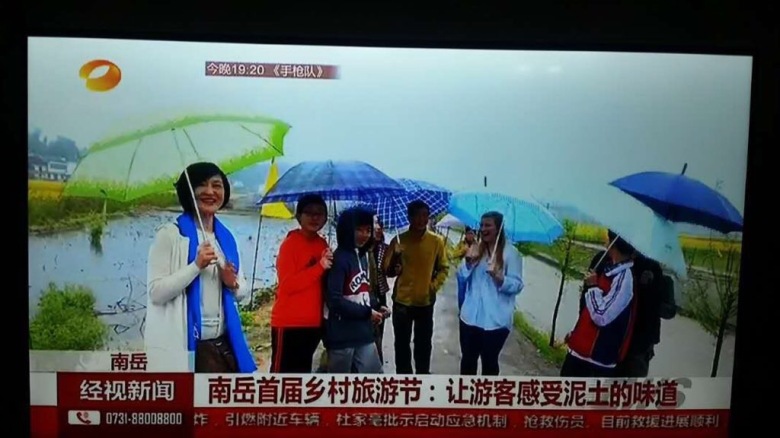 Some other adventures this month:

Lauren and I went to Pizza Hut with Mervin. 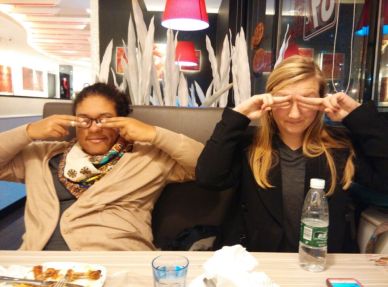 We cooked Mexican food with two of Laurens students from last semester, Deeping and Ivy. (Okay they cooked and I took pictures and ate) We also tried Durian for the first time and I was surprised to find I liked it! 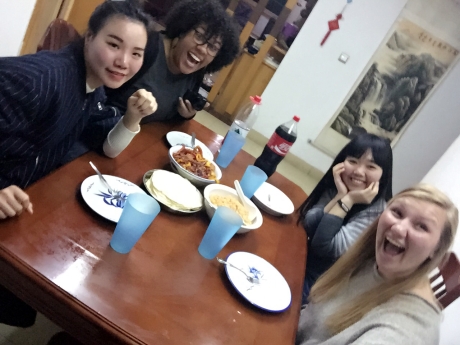 Last weekend we also had the opportunity to meet with teacher from Hengyang Normal University! It was so awesome to talk with other teachers from America and see another university (and make some delicious homemade pizza together)

Our friend Young (the one with the English school in town) started something called Chinese Circle on Wednesday nights, where foreigners can go and pick up some Chinese. I went this past week and it was a great opportunity to meet some new friends and learn some new Chinese phrases! 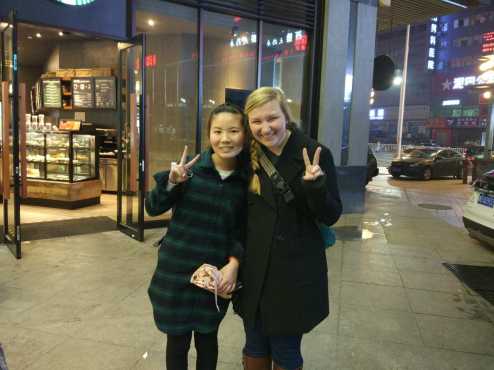 Man not blogging for a month has really backed me up on pics and stories! I’ve been working on updating lots of things and contemplating new ideas so bear with me a little while. There have been so many exciting moments this month and lots of precious experiences with other brothers and sisters! Please keep Thinking about us as we love on China!