I think it’s so cool how the big guy upstairs lines things up and brings people and places together for His purpose. I’ve been thinking about that a lot lately, especially with 9 MONTHS gone and just ONE month left in China. I’ll try not to get too sappy here (I need to save that for a later blog post). I’ve been going through pictures and videos from this past year and am so amazed by all the crazy good things that have happened.

Here’s one – last May my advertising professor at Harding told me: “If you’re going to China, I’m going to see you next summer.” He’s been coming to China almost every summer for the past several years to teach and travel. Fast forward one year and here he is in China with me! I took his intro to advertising class in Spring 2014 and I don’t think either of us imagined we would be across the world together in two years. 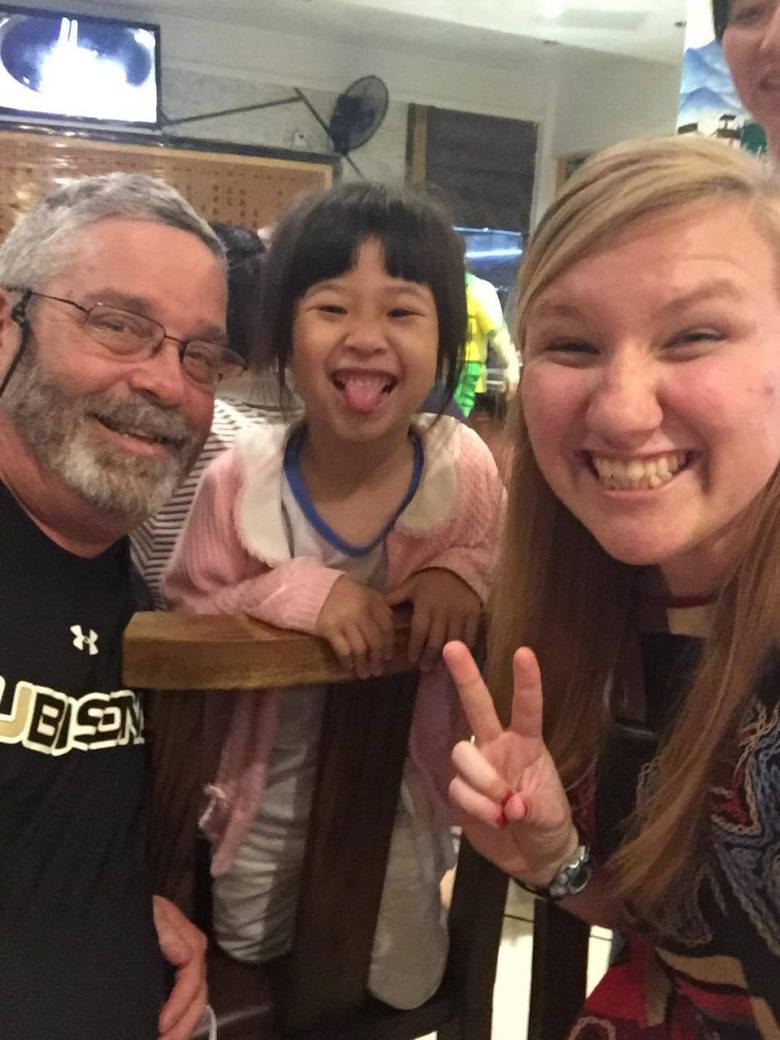 He stayed in Hengyang for 5 days and we had a great time catching up, eating Chinese food, going to Chinese corner, and hanging with friends. He also came to several of my classes and my students were so excited to meet Xie Yeye! He has such a passion for China and the Chinese people here and it’s so fun to share that same love with him.

Another cool thing this month was the opportunity to play on the foreign teacher’s volleyball team. There is a competition every year that all the teachers from the different colleges at Nan Hua play in – sometimes its basketball, sometimes it’s badminton. This year it was gas volleyball. One of the English teachers, Bernard Li, has played volleyball with me before and asked me to join their team because they need 2 women and 3 men on a team.  Gas volleyball is a little different than regular volleyball – the ball is lighter and the court is smaller, making it super easy to hit the ball out.

We practiced several times the week before our games and then played two games Saturday night and one Sunday morning. We lost on Sunday morning which was a little disappointing, but it was still super fun to play with a team and wear an official uniform!

My classes have been great – lately we’ve been working on impromptu speaking. The students often participate in speech contests where they have to give a prepared speech and an impromptu speech. They’re so good at memorizing things, but when it comes to speaking without preparation, even just answering questions or having a conversation, it’s harder for them. (And impromptu speaking is just difficult in general, let alone when you’re doing it as your second language like they are.) I’ve also done some other fun speaking activities with them like a murder mystery, the four people three liars game, and performing a drama using idioms we’ve discussed in class this semester.

Last week it was my week to do English corner and a culture lecture at the new campus and old campus. For English corner we played the “Never Have I Ever”game and it was so fun!! At the old campus we played and then had a great conversation afterwards. At the new campus over 35 students came and they realllllly got into the game, screaming and yelling as they traded places.

For my culture lecture I decided to talk about viral videos in America and their impact on American society. As a communications major (and avid internet video watcher), I think it’s such a fascinating part of our culture and know it’s a big part of Chinese culture, too. I started with some funny videos and trends like milk gallon smashing in the grocery store and planking and then moved onto videos gone viral for a cause, like Kid President, ALS Ice Bucket Challenge, and KONY 2012.  The students had so many great thoughts and we had an awesome Q&A time afterwards.

Lauren and I recruited our friends Mervin and Rachel to help us go to the hospital to pick up our physical examination results and get a new phone for Lauren, and they tried their first Starbucks drinks lolol.

There’s so much left to tell you guys before I leave China in a month! I’m going to do my best to share some other photos and thoughts, and I’m also working on some videos I’ve been wanting to do for awhile. Stay tuned 😉 And as always, we would love your Thoughts – even though we have just 4 weeks left, there are still great things to be done here!