I’m a huge fan of city views and this was fantastic because it was FREE. We went Thursday but it was really foggy, so we tried again the next day with no problems because there was no fee and hardly a line to get to the top! You can see all over Tokyo and can even see Mount Fuji from a distance.

The Meiji Shrine is outside the Harajuku Station in the Shibuya area. It’s in a gorgeous forested park, and we saw two traditional weddings happening here. You can write some wishes for the world and pray here. 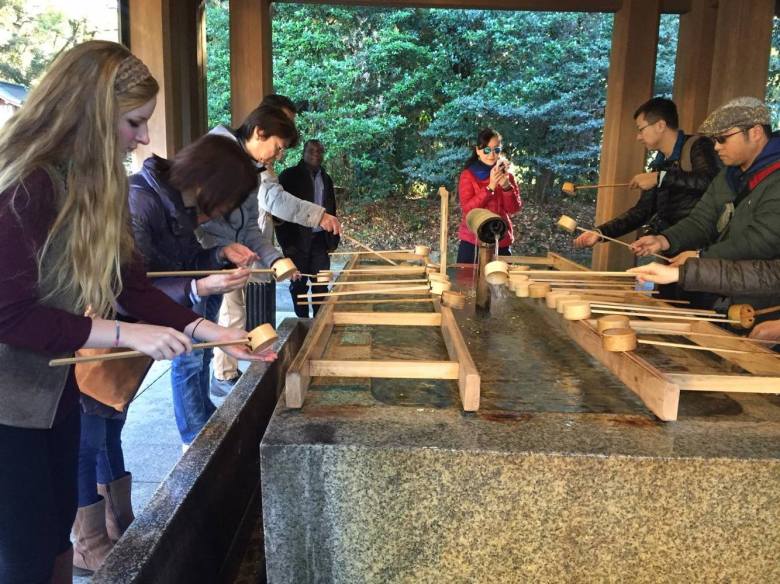 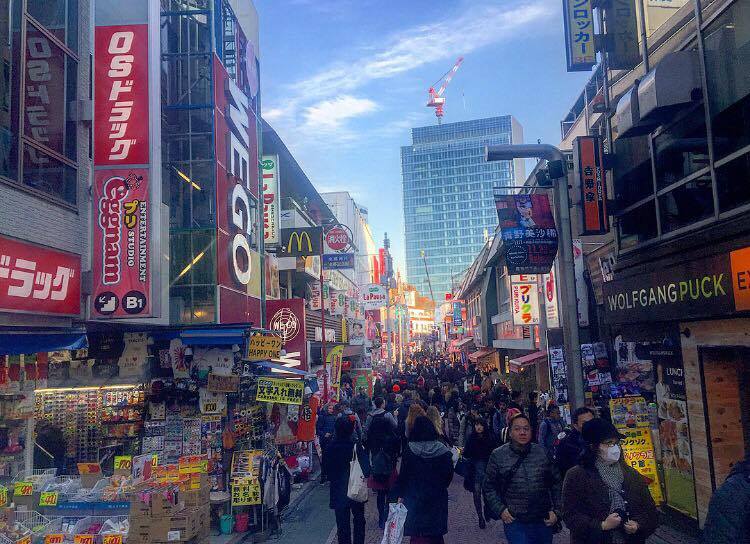 This street is famous for its shops and its fashion and it is crowded. It’s a great place for people watching and for grabbing some strange and delicous street food. We stopped for kebabs inside a little food court and they were so good. (Keep in mind I’ve been used to only eating Chinese food for 3 months and any food variety was welcomed).

This was on my definitely-must-do-in-Tokyo list. I read about all the animal cafes in Japan and really, really wanted to see the owls. We walked by the Owl Forest on Takeshita Street and for just 640 yen you could walk through and pet the owls. 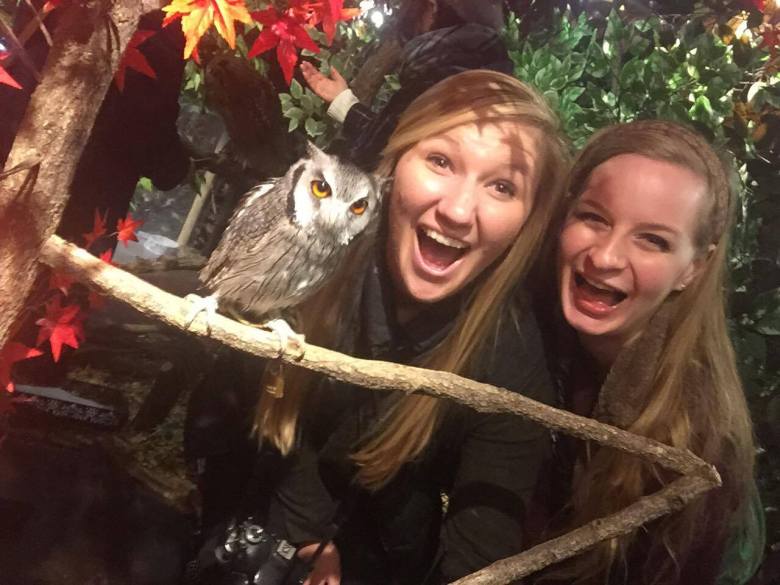 If you like Anime, Manga, Computer Games, and everything else in between, you have to go to Akihabara. There are countless arcades and shops, themed restaurants and manga internet cafes. 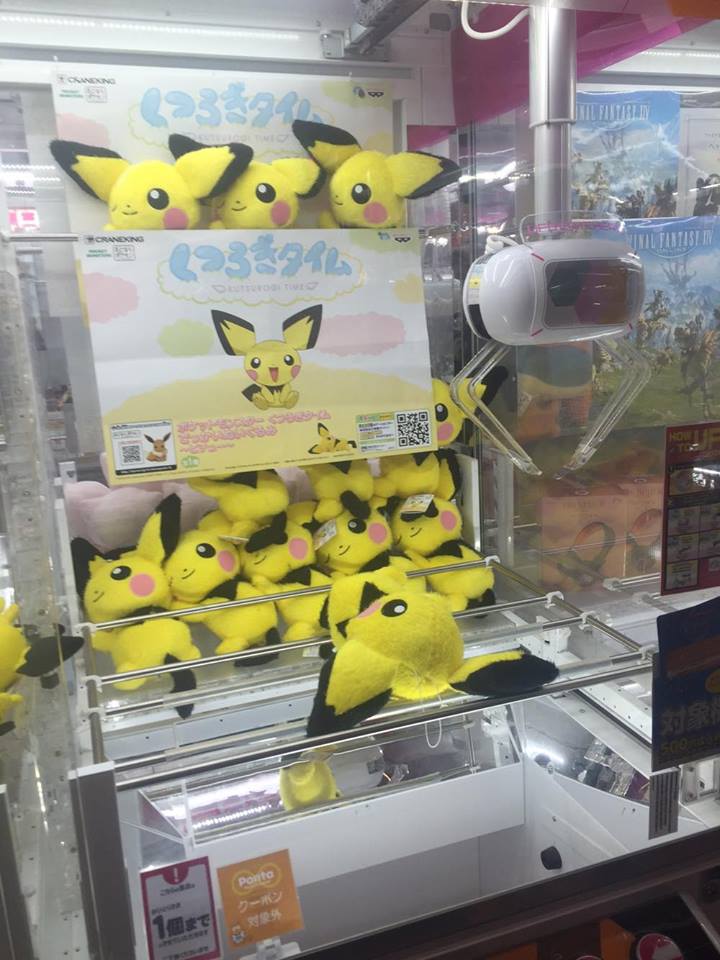 When in Japan, you eat sushi. There’s lots of conveyor belt sushi places to walk into and try. I’m a huge fan of this because while I enjoy sushi, I don’t like a lot of it and I’m not very adventurous in my sushi taste (I’ve tried to love it, really.)  You just grab the kind you like as it passes by, and then you pay for the plates you ate at the end.

As a bonus, we sat next to a really nice guy from England. His name was Ollie and he was traveling solo for three weeks (life goals) and we all exchanged contact info.

We took a subway back to the Roppongi Station to check out the Midtown Christmas Lights, a beautiful light show that is arranged every year. This year it was designed to look like the universe, with shooting stars and galaxies. It was amazing. 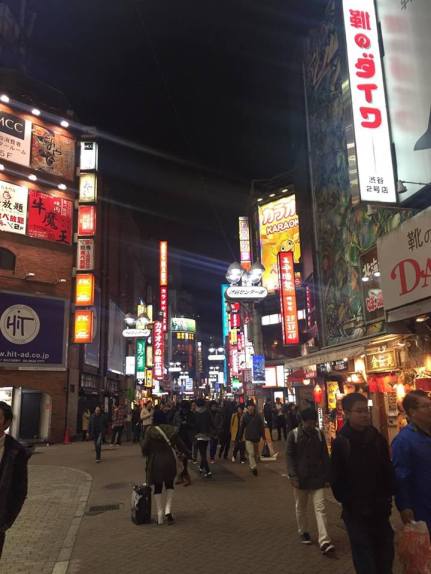 We went back to the noodle shop in Shibuya to find our photos that we left there last night (sadly they didn’t have them), and we also wanted meet up with our new British friend from the sushi shop. We hung out with Ollie and another American in the navy stationed in Japan. We were out so late though that we missed the last subway back to Akebonobashi where our hostel was and had a 20 minute walk back.

Some Australian guys staying in our hostel were heading to the Tokyo Imperial Palace on the same morning that Meredith and I were planning on going there. We tagged along with their crew – James, Daniel, and Elliot were on a break from school and spending a month traveling Japan.

It was really fun to hang out with them and share American and Australian slang. While we waited in line for tickets to the Imperial Palace tour, we learned about “sunnies” (sunglasses), “bathers” (bathing suits), “goon of fortune” (a drinking game) and that you should always say Melbourne without the R sound, not “MelbOURne” if you don’t want to sound like a tourist/idiot.

They told us about Christmas “barbies” (Barbecue! On Christmas Day! And it’s hot outside!) and how much the French people love them but some people still give them slack about being a bunch of convicts. It was also an enlightening day for me as an American where I learned how often I say “Yeah” and “Awesome”.

The tour was about an hour of walking around the Palace grounds; the only tour guide for the 300 people in our group was Japanese, so while he talked we mostly speculated what he was saying and took heaps of selfie stick pics. (Australians say “heaps” a lot.)

We took the subway over to the Asakusa station to visit the Senso-ji Shrine.It was busy, teeming with buyers and sellers, street foods, souvenirs, and people going to pray. 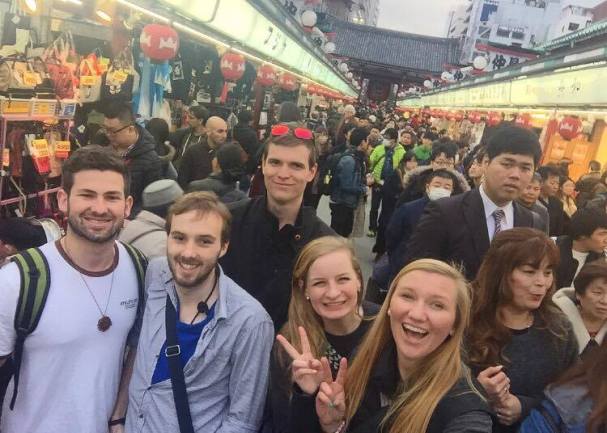 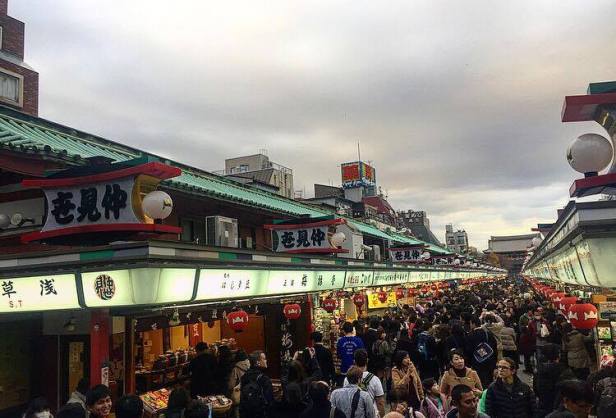 After visiting the shrine and eating sushi and fried octopus, we went back to the hostel to meet up with Alli. Once our group was ready we all headed out to Shibuya (for the third time), Australians in tow with us. We went to the pub we were at with Ollie to pick up some things Meredith left there the previous night (Shibuya is not really our lucky place) and we hung out there before going back to our hostel and hanging out with other hostel-stayers until 2am.

It’s a bittersweet thing spending your last night somewhere, saying goodbye to people and places and hoping one day you’ll come back, but knowing it will be a completely different experience when you do.

On the bright side, during our Spring Festival travels next year we were planning to visit Sydney, Australia. Now that we know the guys in Melbourne we’ve decided to swing by for a few days to see them again.

We woke up at 6:15am and left the hostel at 7am to begin the journey back to Hengyang. A subway, a train, a plane, another subway, another plane, a taxi, another train, and another taxi got us home by 10:15pm. It was a long stinking day. Having 3 days in Tokyo and two full travel days getting there and back may not seem ideal, but it was 100% worth it and I’d do it again.

Tokyo came at the perfect time for me. I love China, but it’s nice to have a little break and a change of pace. In Tokyo we were busy all day. We didn’t sleep much. Eating was irregular. My phone was always in danger of dying because outlets were limited in our hostel (first world probs right?) and I had to exchange more money twice.

We met people from Sweden, Finland, Canada, Australia, England, and America; people studying in Korea as foreign students, a fashion designer from Mississippi, two girls working as tour guides in Phuket, Thailand. You meet all kinds of people in hostels – some people are showy about their travels and love to brag. Some are comedic and love for people to listen to their stories.And some are inspiring, they breathe new life into traveling and make you want to do more, be more. I love staying in hostels and hearing other people’s stories because it reminds me why I do this, why I wanted to stay in China for another year. 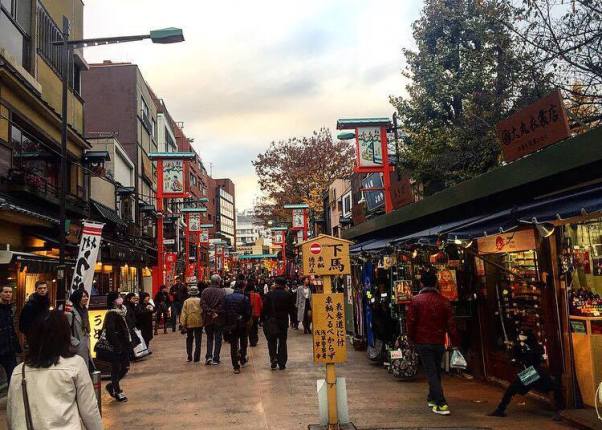 This experience turned out to be more than I expected – we got lost, we made mistakes, but we saw so much in 3 days and made new friends to maybe see again one day. It was the perfect shake up to my routine – an expensive one – but totally worth it. Go to Japan. You’re gonna love it.

Also, if you’re curious about my itinerary and weirdly interested in documenting the times of everything like I am, here’s a schedule I made during our trip: japan-trip-itinerary