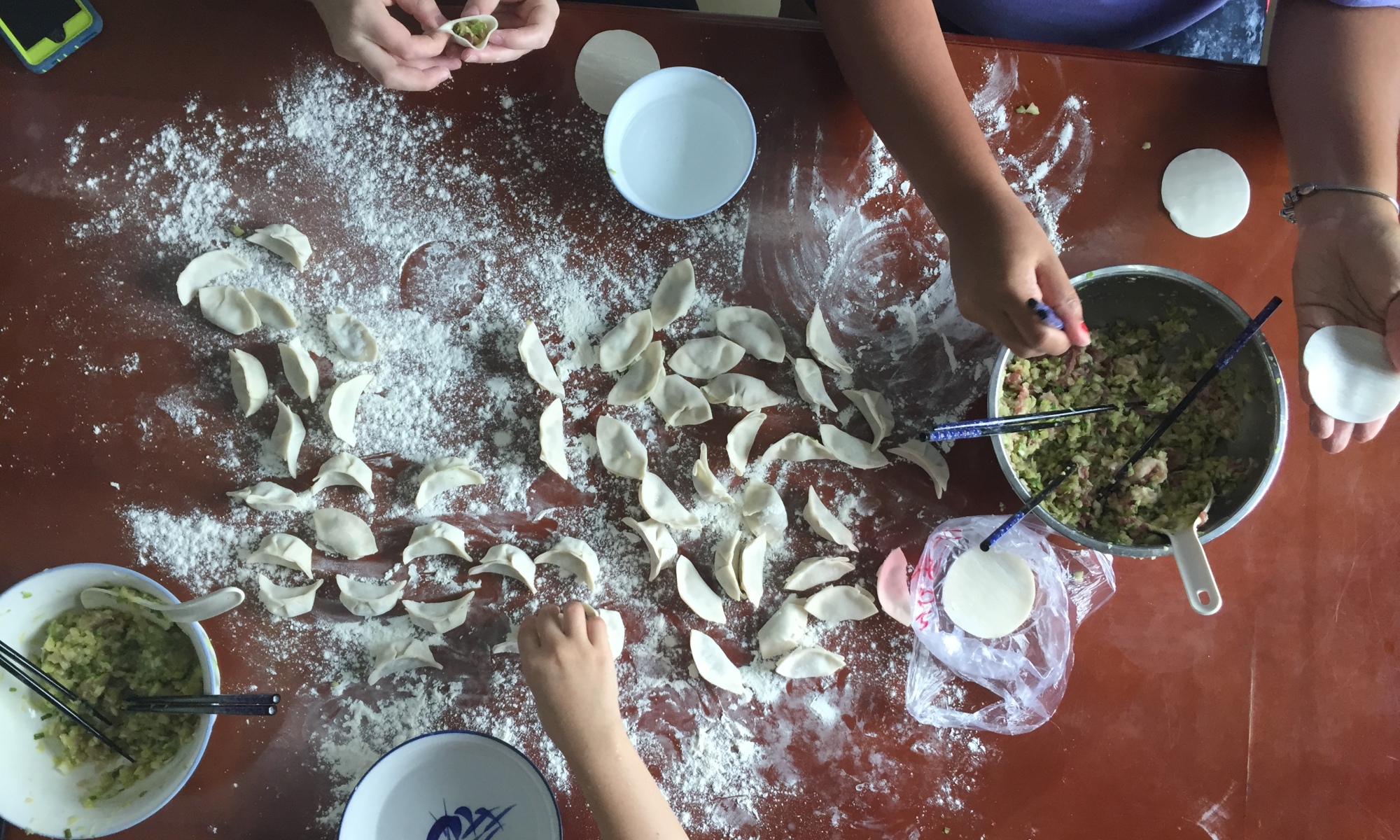 Minnie came over at 10 a.m. to teach us how to make Chinese dumplings! She went to the market early in the morning to buy the dough for them – she bought 2 bags of around 60 each. Minnie told us making dumplings was a tradition that families do together for Christmas and other holidays. 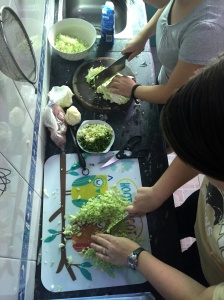 Once your mixture is ready, you spread flour out on the table and start filling your dumplings. You have to wet the edges of the dough to make it stick together, and you also have to fold the dumpling a certain way to make it “prettier and look like a chair” Minnie told us. I showed my first dumpling to Minnie and asked “Does this look weird?” And she looked at my sad little dumpling and said “Yes that is very weird.” 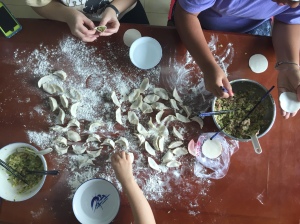 We all got much better at making the dumpling shape and perfecting the amount of filling that goes inside, and then Minnie put them in boiling water. When they start rising you’re supposed to pour cold water over them to make them sink again. You do this 3 times, and on the third time they’re ready to be taken out and eaten! We made a sauce mixture of soy sauce, black vinegar, and sesame oil to dip the dumplings in and it was so good!

For the past week I’ve made it my mission to learn more about the city and the people here, so I’ve spent a few hours walking around everyday. Sometimes I go with a specific plan in mind like finding a new way to the store, or other times I’ll just see where I can wander (and often times get lost). Here’s a few things I learned.

Pedestrians have no rules. You don’t want to wait for the green cross walk sign? Just go whenever you feel like it. The cars will just have to deal with it. (Of course don’t be ridiculously bold about this and walk straight into a bus). I’m a pretty passive person but have learned to be aggressive crossing streets

Street food is CHEAP. You can get most items for under 15 RMB ($2.35). They sell everything from chicken and pork and squid to fried dough balls and noodles and veggies (the chicken is so good!) 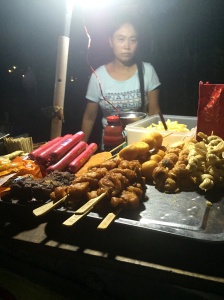 Night time here is so fun. People are worried about me walking around at night alone, but the crime rate is actually lower here in the U.S. Be smart, of course, and avoid those dark, scary alleys, but the main streets are filled with music and lights and people and I love it. They have a thing called “square dancing” where they bring out a stereo and a lady will lead a group in dancing. It looks like a zumba class except it’s more graceful and out in the middle of public squares and sidewalks.

I’ve heard many things about how people respond to Americans in China – that they stare, that they ask to take pictures. There’s been a little of that, but most people glance at me and can tell I’m different, and they don’t openly gape. Some of the younger Chinese people think it’s fun to talk to me. They get really excited and say hello and other English words they know. I’ve received a few hugs, and I’ve also made a few friends this way.

Today on my way back from the grocery store a young guy said “Hello! How are you?” to me and it started a 20 minute conversation. His name was Leo and he is a Mechanical Engineering student at the university but loves learning English. He asked if we could meet up and practice his English and he offered to help me with my Chinese!

The people in general are very friendly. One time I bought this super spicy chicken and literally was crying because it was so hot. I bought a water and sat on a bench struggling to open it for five minutes. This man inside a shop nearby saw me, motioning he would open it. My hero did it in two seconds! Another time I was trying to order a drink using the pointing-at-the-picture method and a mom and her kids saw me and tried explaining to the lady. Their English wasn’t very good, but it was very kind of them to try to help!

If you wander around long enough, you’ll find what you need. On our first day here, Robert mentioned they just opened a Starbucks here in the city and I’ve been wanting to find it! It was a glorious moment when I saw it, and I was very excited to see that their menu was still the same. They also had the normal U.S baked muffins and cakes too, which was surprising since China does not do muffins and cakes like we do.