This semester has been really different – I started volunteering to teach some kindergarten and primary students during the weekends!

I love kids. I was a camp counselor for three summers during university and I’ve always loved playing games, singing, and being silly with my campers. I’ve really missed hanging out with kids while in China, so I was super excited about the opportunity to volunteer and teach English to Chinese children. 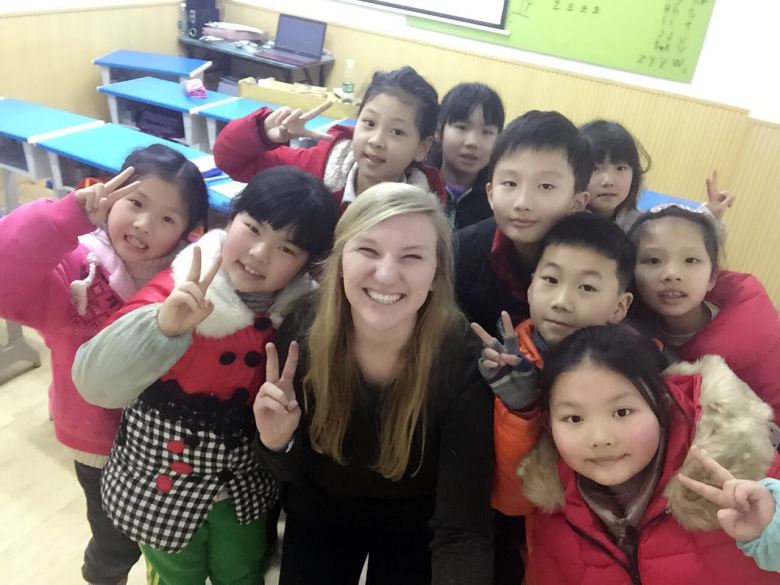 Teaching English to kids is so different than teaching University students

When I went to the school on the first day there were kids swarming the desk. They shyly came up to me and said hello and then would just laugh and run away when I asked them a question. The best part about kids though is after awhile the shyness goes away. I started speaking a little Chinese and translated a few things on my phone and soon they were asking me more, speaking Chinese. It was awesome. Kids are kids anywhere in the world. We would say words, teaching each other. They would tell me their names and make jokes about each other.

Kids love games and songs – it’s a great way to keep them engaged, teach them new words, and get them excited about English class. My experience as a camp counselor definitely helped me out here because I love doing these things. I just had to find ways to adapt games to make them more conducive for English learning or find simpler English songs that they could follow.

I help with an advanced primary class, three medium-level primary classes, and a five year old class. The higher level is surprisingly mature and understand so much. There’s a boy named Rainbow who is the cutest little thing and a girl named Angela who acts more like 15 than 9.

Two of my classes are crazy, the students I met at the desk my first day. I think we liked each other immediately, which is both good and bad because they’re so fun and engaged in class, but they get a little crazy. Everyday when I come in to the school they’re waiting for their class to start in the lobby and start chattering immediately and it’s my favorite thing. They give me Chinese snacks and teach me the Chinese names. 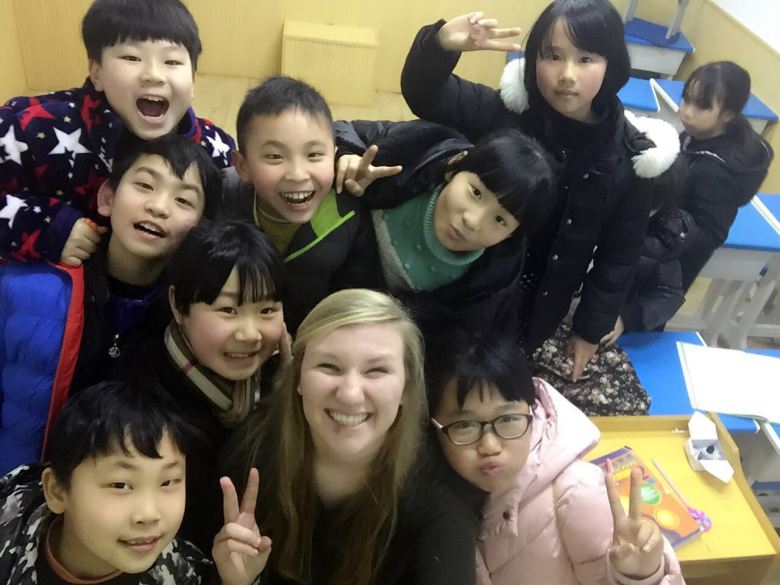 My fourth class is less crazy – they listen very well and they think everything is the most fun thing ever. One day in class I asked them to create some sentences using the vocabulary words we learned, and they LOVED it. They would raise their hand, “Teacher! Laoshi!” And I would call them to the front to say their sentence and write their sentence on the board. Then they would sit down again, immediately make a new sentence and call my name again. I expected this activity to last maybe 10 minutes and I think we did it for like 20 hahaha.

And my kindergarten class – they’re so cute I almost died the first time I saw them. Kindergartners aren’t an age I’m super experienced with, but they’ve quickly become my favorite class to teach. They remember so many things and are so sweet (And they’re not too cool to sing silly songs and make animal noises.) 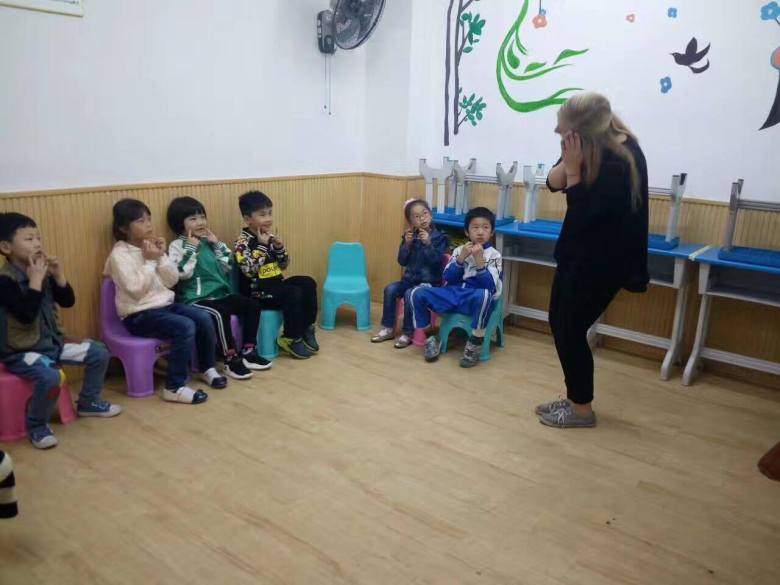 If I had come to China and started teaching kids right away I think I would have learned Chinese more quickly – I often say an English word and ask them for the Chinese name and have picked up so much new Chinese vocabulary in this way.

But at the same time I think starting out with kids would have been hard because I knew no Chinese. Explaining some things in English to them can be difficult. They’re very good with words – they know basic things like, animals, colors, and food. But if you speak sentences to them, they’re lost.

When I first started I had to create my own bad Chinglish phrases to explain something – “Wo shuo, nimen shuo” is my (incorrect) way of saying “I speak, you speak” when I want them to repeat something I say, or I say “Ni ting, wo shuo” which is “You listen, I speak.”  I have a Chinese teachers assisting me sometimes and this makes it easier when explaining or trying to get the students to calm down when they get too crazy.

What do we do in class?

When I first started teaching we would start class with a song and then we would do a review of the last classes vocabulary words and move on to their next Letter book. As we read it we we talk about the book; what’s in the picture, how many of this, what color is that, what’s happening, how do you say this in Chinese?

After that we would play some kind of game, reviewing words or introducing new words to them. Charades, Pictionary, Simon Says, 20 Questions, iSpy, and Categories have been hits. We’ve also sang the Hokey Pokey, Head Shoulders, Knees, and Toes, and Baby Shark (which they LOVE).  As I did these things with the classes I would adapt it depending on the students’ level and what they liked. Students like fresh and new activities so I would change things up!

We have a special Children’s Day performance coming soon, so lately we’ve been practicing English plays for the classes to perform. They’re doing Snow White, Cinderella, a play about Cops and Robbers, a play about Princesses and a Pirate (which I wrote because there are eight girls in this class and they all wanted to be princesses), and a play about zoo animals (which I also wrote for the 5 year olds.) I’m so excited to see how their show will be because they’ve been working so hard every week! 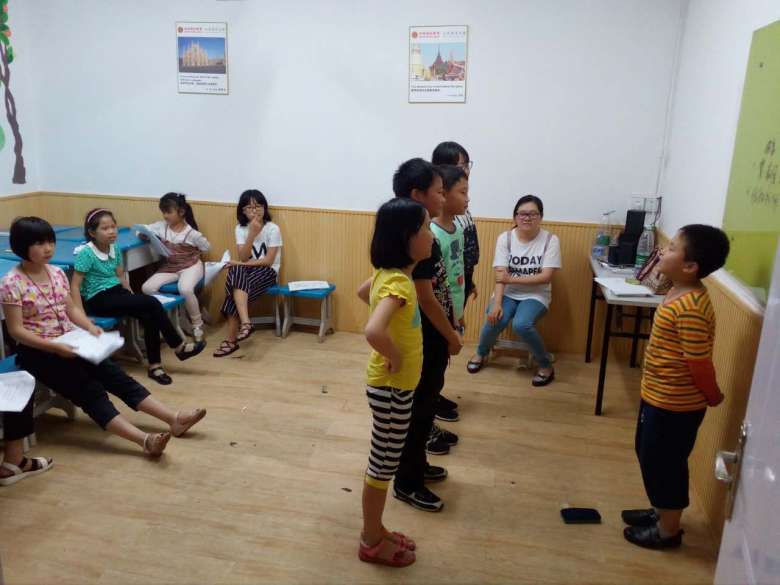 I also spent a weekend helping with some other primary and middle school students. 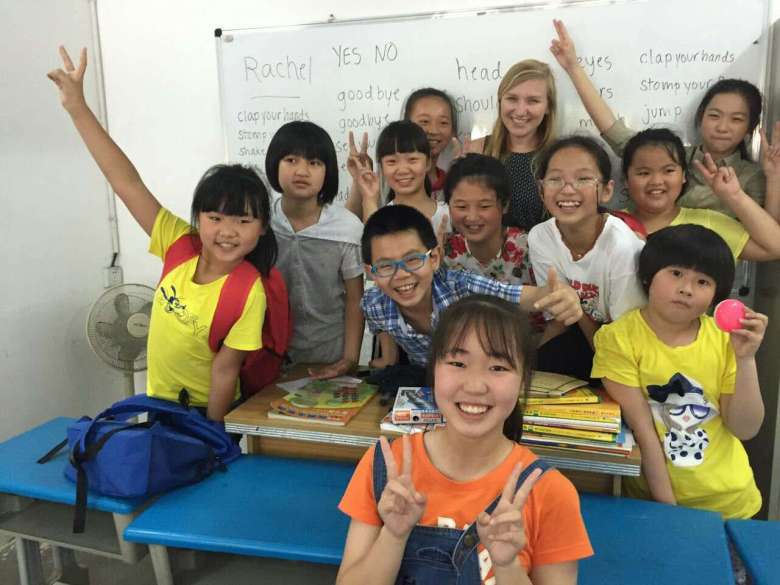 I’ve been volunteering with these kids for a semester now and it makes me sad to leave them in a month! Before this semester I wasn’t sure what I wanted to do next year, but after this semester with these students I know what I want to do! More on that later…. 😉