There’s this trend going on called rooftopping which involves finding tall residential or commercial buildings in a city and doing extreme things like dangling off the ledges and taking cool photos.

I’ve recently been inspired by lots of photos I’ve seen in Guangzhou (and also other places) by people who are rooftopping experts. I think it’s such a fascinating idea, and it’s been on my Guangzhou Bucket List to try out for some time, slightly adjusted though. I’m not going to try hanging off a building or anything too crazy like that folks, but I am going to see where the best rooftop views in Guangzhou are. 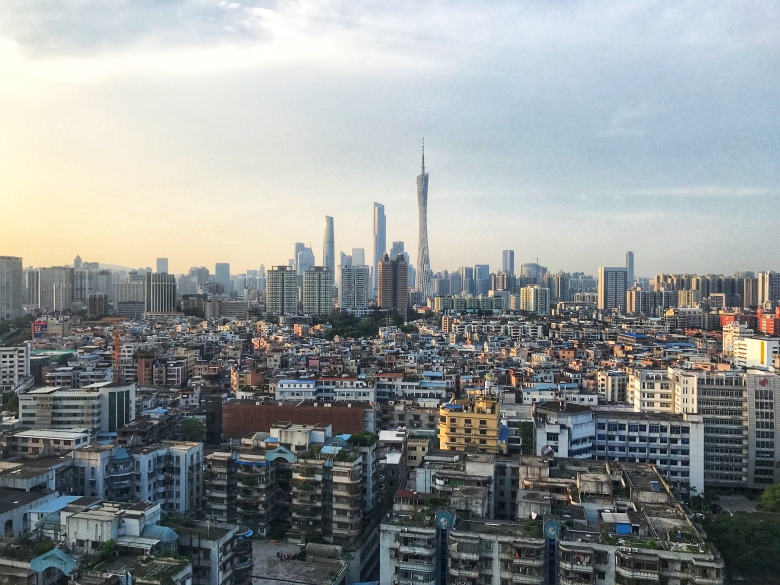 The rules are simple:
1. Find a tall building
2. Walk inside (might need a resident’s help)
3. Ride to the top floor, go up the stairs leading to the exit – boom, you’re on the roof

In my mind I figured a problem might arise. You might encounter security guards, need a pass to get inside, or there could be alarms at the top. The last thing I wanted was to get in trouble! I also wasn’t sure where to start looking for buildings, but a photo I saw on Instagram that gave me a good idea of where to look.

In reality it was actually quite easy. I found that security guards don’t pay much attention. Several called out to me, “Nihao meinu” as I entered apartment gates and they waved me inside – meinu means beautiful girl, but in Chinese this is a common way to address a girl you don’t know. Still it’s nice 😉

At the top of one building there was a man sitting on the rooftop stairs and I thought I would have to explain something. But nope, he was just chilling there, too. Another guy was up there cooking dinner so it was like we were all at a little neighborhood BBQ (kinda).

Anyways, I visited several buildings in the Kecun area and was astounded with the views!

The first building I went to was closer to the Canton tower and had a nice glass railing to stand against (I got a little carried away with the hair flipping photos here). 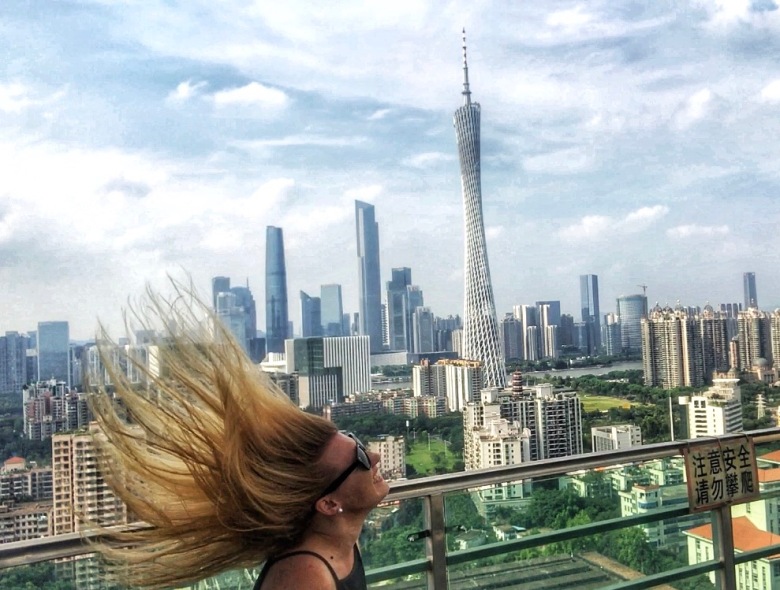 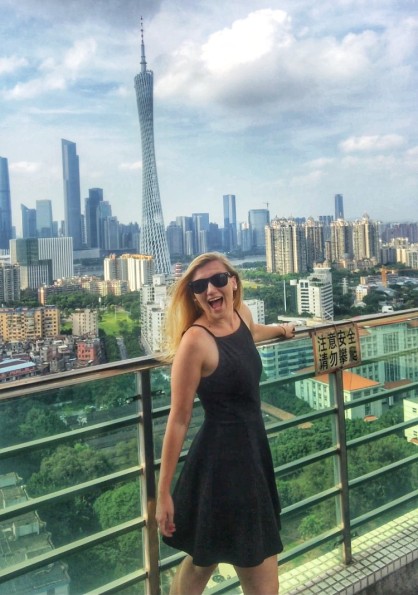 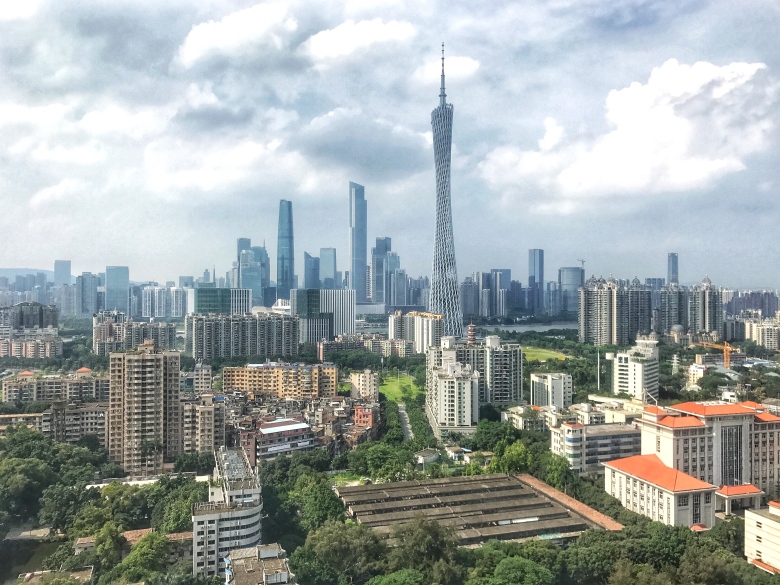 I tried two others further away but they didn’t quite have the angle I wanted.

The last one I went to had the most amazing view. There’s a structure on the roof you can climb up to get an awesome unobstructed view of the tower – just be careful and don’t trip!

When I was up here another guy came along. He gestured up at me, asking if he could join me on top. I said yes and asked him some questions but be spoke no English. Aha! Someone to inflict my Chinese conversational skills on.

He was actually really happy to chat and show me other rooftop photos he’s taken and I was really happy we could communicate and he understood me! It’s fun to see that my lessons with my teacher are really helping improve my Chinese and things I didn’t know two months ago I can now apply in conversation.

He told me lots of people come to this building to take photos because of the location, and it was his second time here. He set up a big camera on the edge of the roof, waiting for the sun to go down and I asked if he would snap a few pics for me and he obliged. 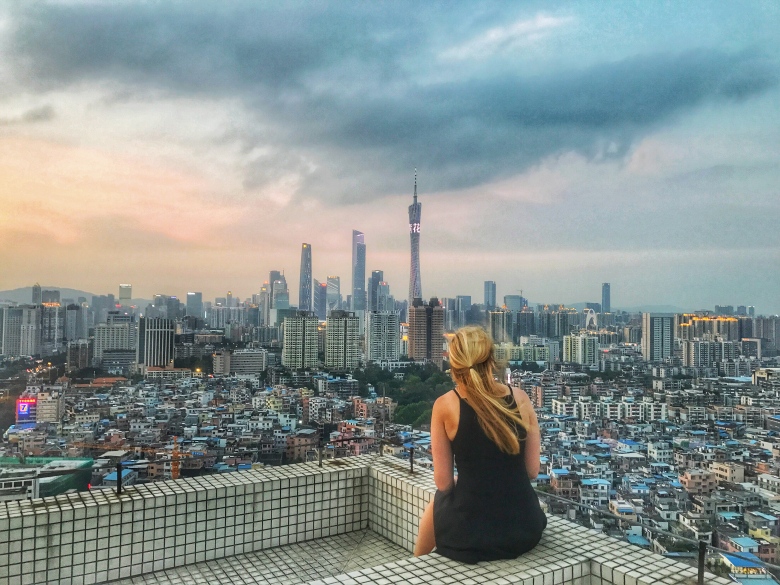 He was really nice and told me he was university student and lived in Guangzhou. Look how cool he is with his camera.

“You inspire me!” I wanted to say to him. “Teach me your ways and be my rooftop guru master!” But I didn’t know how to say all that in Chinese so I just told him, “Hen piaoliang! Ni hen lihai!” (Very beautiful! You are really great!) We watched the sunset over Guangzhou together (so romantic!!! Jk) 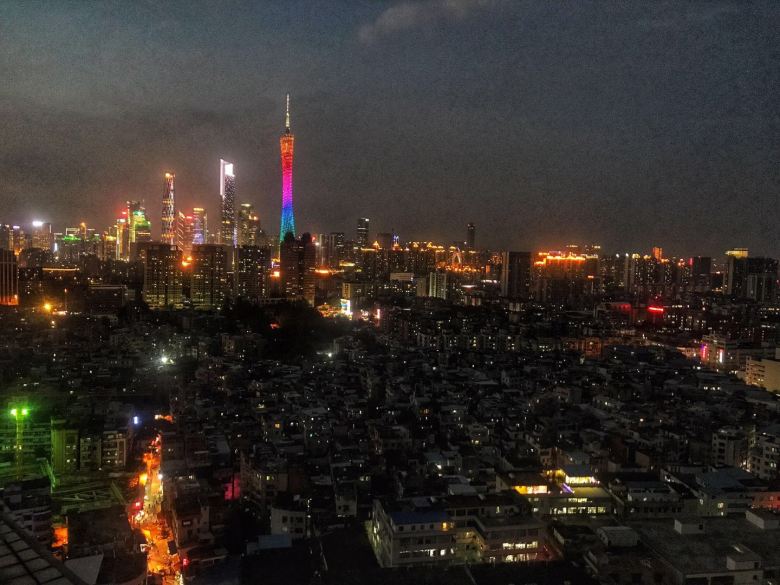 I put together a little video showing some of these rooftops. Check it out here!

Also! If you’re going to try this just be respectful of the residents and the building, leave things the way you found it, and all those other Girl Scout rules.

Side note, I’ve just been using my iPhone for pics because there’s a problem with my DSLR! Anyone have good recommendations on lightweight, high quality cameras? I was looking at some Sonys and heard good things about them.

Until the next adventure.