The Forbidden City is located right in the heart of Beijing and is a must-see when you visit the capital city of China. The ancient Imperial Palace of China, called Gùgōng (故宫) in Chinese, is a popular tourist location and covers a large area, so it’s best to do some planning before you go to make sure you get the most of your time there.

I’ve been inside and around the Forbidden City a few times now and wanted share some tips for making your experience more worthwhile at one of Beijing’s most famous historical sites!

Before You Visit the Forbidden City

Here’s a useful map showing the location of the Forbidden City, Jingshan Park, and other popular destinations to visit inside the center of Beijing and Metro Line 2.

Buying Tickets For the Forbidden City

Only 80,000 tickets are sold for Forbidden City everyday, so it’s smart to book your ticket ahead of time to ensure they’re not sold out on the day you go.

There are a few options for buying tickets:

Tips for Visiting The Forbidden City

1. Remember your Passport: You need your passport to get inside the Forbidden City/Tiananmen area, and also to collect your ticket.

2. Avoid Weekends and Holiday: During holidays, especially the National Week in October, the Forbidden City with be especially crowded! Avoid holidays if you can. If you can’t avoid this, go really early right when the Forbidden City opens or later in the afternoon when people are leaving.

3. Walk Around the Sides: People usually stick with tour groups in the central areas of the Forbidden City, but there’s actually so much to explore around the edges and sides – and you’ll get better photos without so many people in your shots!

4. The Forbidden City is huge: If it’s your first time visiting, it’s a little overwhelming how much there is to see! Many people go with tour groups or have a guide to teach them about the history and guide them through. You don’t need a guide, but one might approach you when you arrive.

5. The Best Time to Visit the Forbidden City: Usually late spring/early autumn is the best time to visit because the weather is not too hot or too cold, but any season is okay for a visit!

The Forbidden City in Summer

The Forbidden City in Winter

The Forbidden City in Spring 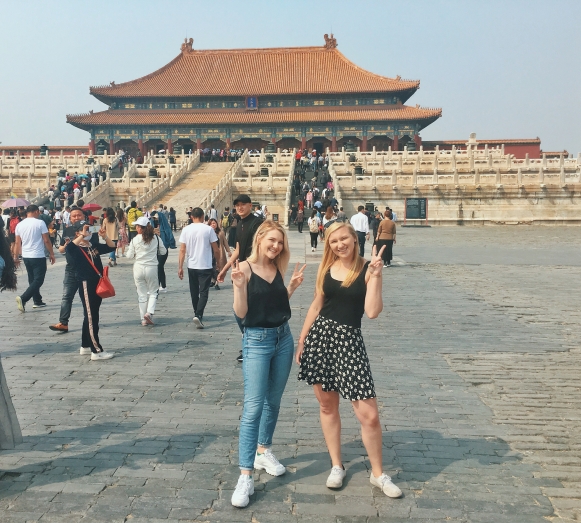 Areas Inside the Forbidden City

There are several parts to the Forbidden City: the defenses (moat and wall), the Outer Court and the Inner Court.

The Moat and Wall 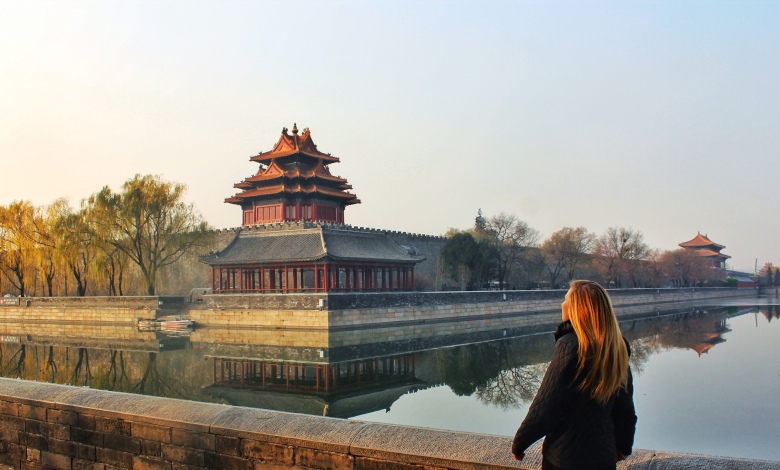 Once you’re inside the Outer Court, there are three halls. The Hall of Supreme Harmony (the most important and largest structure in the Forbidden City), the  Hall of Central Harmony( the place where Emperors would rehearse their speeches and presentations), and the Hall of Preserving Harmony (used for banquets and later for imperial examinations.)

The Inner Court has three main parts: the Palace of Heavenly Purity (where the emperor slept), the Palace of Union and Peace (where the imperial seals were stored) and the Hall of Terrestrial Tranquility (the emperor’s wedding room). 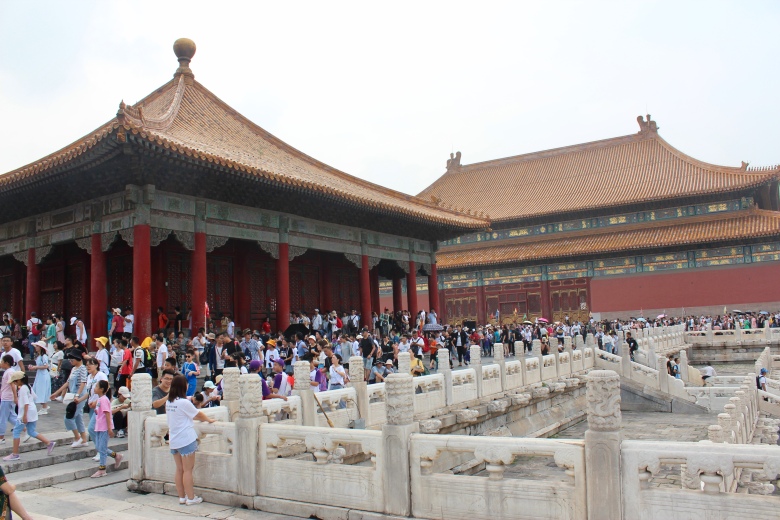 Other Places To Take Photos of the Forbidden City

If you’re looking for other places to take shots of the Forbidden City, there are several other places that will give you a great view: 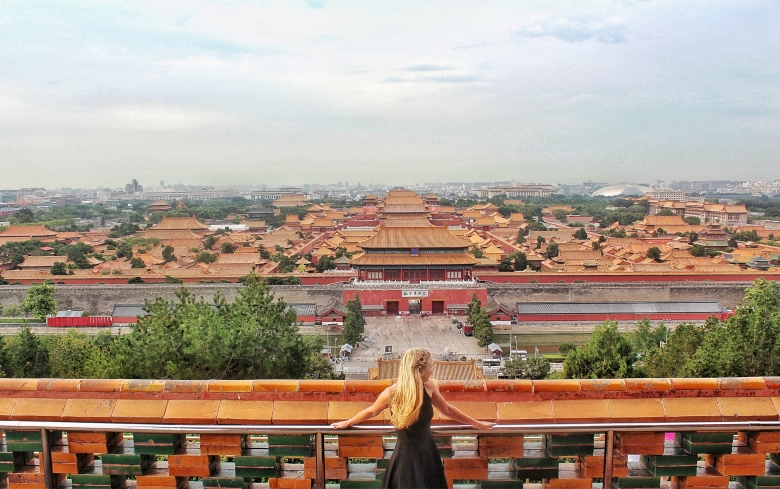 These cute little ladies were laughing at me taking photos. 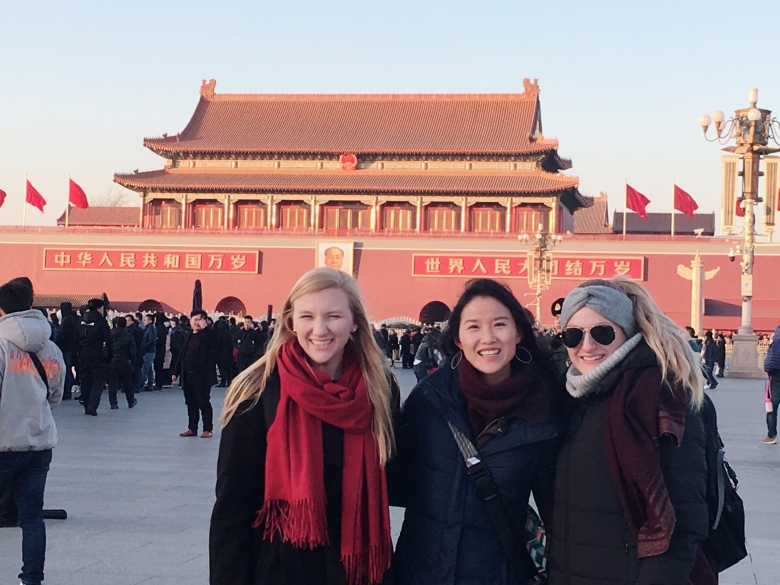 The Forbidden City is a must see for Beijing visitors! No matter which season you choose to go during, this imperial palace will definitely amaze you. 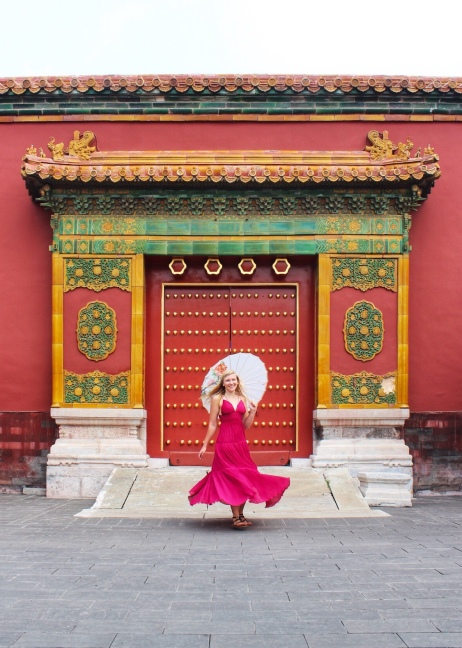 Other Places To Visit in Beijing

Beijing is the ultimate China travel destination! You’ll find everything from ancient temples and palaces to lively shopping streets and modern art districts. Some other things you shouldn’t miss in Beijing: